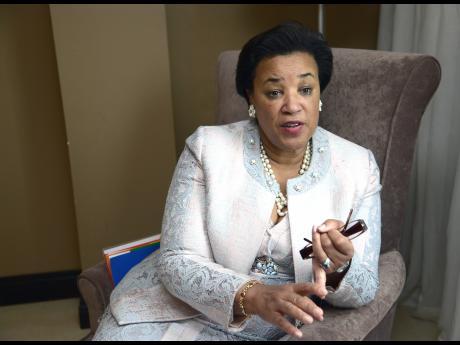 Youth, employment and wealth creation and corruption were among critical issues raised by Prime Minister Andrew Holness when he met with new Commonwealth secretary general Baroness Patricia Scotland on Tuesday.

Scotland informed The Gleaner that she is on a mission of forging new partnerships among Commonwealth member states in order to strengthen the body economically and otherwise.

"The first thing that the prime minister raised were issues relating to youth," Scotland said. "He (Holness) knows perfectly well that I, too, am very focused on young people. They are the future to be invested in, given opportunities to be nurtured."

Scotland continued: We also talked about how to enhance wealth as well as wealth creation so we can create more jobs, more prosperity and more opportunity for people." According to Scotland, there was also discourse on how better alliances can be forged among member states.

"How we can work together as a Commonwealth to get the changes that we need is of critical importance," she said. Scotland disclosed that related issues of climate change as well as the financial services industry were also raised. During her visit, Scotland met members from the political directorate, including Government and Opposition. She also met with members of the business community. She told The Gleaner that she was inclined to work out how lasting partnerships can be created.

"I wasn't sure whether what I aspire to do would find a resonance in others, because I can't walk this journey alone," she said.

"I have to see who is going to walk with me and whether it is the right road." Scotland also maintained that many are now catching on to her view that the Commonwealth remains relevant.

"I think that what I have heard from them is a growing confidence that we can do this," she said. "It is satisfying to know that we are able, together, to generate a greater sense of confidence and people are starting to realise that the things we can do together as a Commonwealth, we can't do on our own."