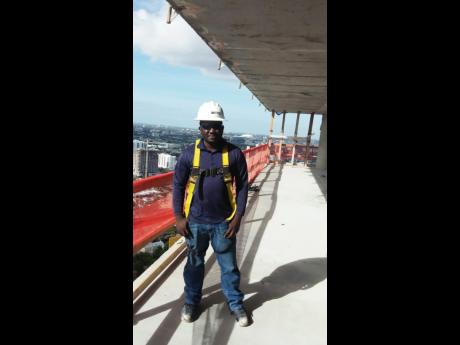 Contributed
Engineer David Johnson at work atop a high-rise building in Miami, Florida. 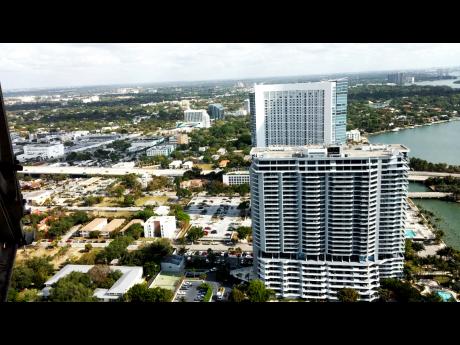 Contributed
The view from the top of a Miami, Florida, skyscraper.
1
2

From the 44th floor of the Paraiso Bay Building, David Johnson can see Miami, Florida, stretched out before him until the McDaniel Memorial Bridge fades into the horizon.

From this height, it is not the breathtaking view that moves him to tears, it’s the stunning realisation that he has overcome all odds in the pursuit of living his dream of building skyscrapers.

“To see that in front of you in the distance takes my mind back to Sheffield where I was born and raised ...then the culture shock of moving to Mandeville and then to Miami and just having a dream of working on skyscrapers. When I saw the Burj Khalifa go up, I knew I wanted to work on those types of buildings and when you are up there it brings a lot of emotions out because it was a dream and now it is a reality,” Johnson told The Sunday Gleaner after completing a day's work on several high rise buildings in Miami.

Landing a job at one of the top consulting engineering firms in Miami was no easy feat. Being one of the lead engineers, building some of the tallest buildings being erected in the city, at age 24, is an accomplishment that still feels surreal.

The journey from the small community of Sheffield in Westmoreland to the high-rise buildings of Miami, Florida was one that was inspired by his family and his best friend, who had migrated to pursue a career in civil engineering.

Johnson’s fascination with skyscrapers was nurtured while completing his masters in civil engineering at Florida International University (FIU).

He had initially resisted the advice of his parents, to pursue graduate studies after completing his first degree in the same programme at FIU, but is now happy that he did because of the skill sets he developed in structural engineering which allow him to ensure that the skyscrapers being erected by his firm are structurally sound.

“A day on the job is interesting because it involves a lot of things. I started out doing mostly quality control inspections on the post tensioning systems that they would use in these high-rise buildings... the highest building I have ever been on so far is 51 storeys and that was really scary because it was my first time... so you have to put on your harness and then you have on a yo-yo that is tied on to the column of the building and you have to look over the edge of the building and you are 50 storeys up and you are checking to make sure the structural system is installed properly,” he explained to The Gleaner.

Now on the job for approximately three months, the Manchester High School graduate has been entrusted with a wide range of responsibilities on a number of building projects.

“I do quality control on entire building systems which includes walking through the building and making sure that there are no structural deficiencies, checking everything in the construction process from drywall to finishes  to ensure they meet specification, making sure the code is met... just a wide variety of quality control from a structural perspective. I also do forensic investigation of buildings with structural problems and propose solutions to solve them,” he said.

Johnson, in explaining how he landed his dream job, pointed out that having a masters gave him an advantage and underscores the fact that as a foreigner he had to distinguish himself if he was serious about a career in civil engineering and living his dream of working on high-rise buildings.

“In my first semester of grad school I struggled, I had to push through, it was really hard. First semester I failed one of my classes and I called my mother and told her I am coming home right now, I can’t do this, it is just too hard, but my parents and my brother encouraged me to push through. Working 20 hours a week in my on-campus job and doing grad school was hard... . I made it because people believed in me. It was not because of my own effort,” he said.

The  numerous struggles he faced while completing both of his degrees at FIU somehow fades into the distance and all seems worth it from up so high.