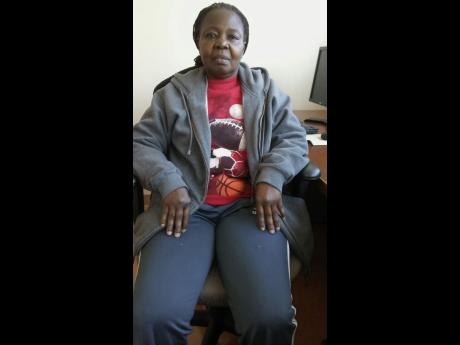 The tragic moment occurred when the minivan she was travelling in crashed in Fern Gully, less than 15 minutes from her destination.

"We were going to Mystic Mountain to have fun. As I speak to you I am just picturing the van making a sound and we called out to the driver, who said it was nothing serious," Wright told The Gleaner while recounting the accident which has caused her to now walk with a limp after coming close to losing one of her legs.

"It wasn't long after that that the van skided and turned across the road. There were a lot things going on. The next thing I know it was on its side and a rock fell on it," she said.

Wright, who was conscious throughout the ordeal, found herself trapped between two seats and she had to be assisted by persons who converged on the scene.

"I couldn't free myself. I heard someone say to me, 'Lady, try and get out of the van because the gas is leaking out and it might explode anytime now'.

Added Wright: "I told the person to assist me because I couldn't move my legs, and he did."

"While I was outside, I saw a lady lying on the pavement, bleeding. I thought she was dead, but I found out at the St Ann's Bay Hospital that everyone survived the accident."

According to Wright, she got very scared when she looked down at her legs and saw that they were badly injured and had swollen very fast.

"I became very concerned and began to examine my body. I was even more frightened when I saw blood oozing from my hands," said Wright.

She revealed that X-rays did not show any fracture, but she could not move her legs. After the doctors attended to her, she asked to be referred to a private Coperate Area hospital for further treatment.

"One of my legs kept getting worse, so the doctor decided to do surgery. I could not walk for almost a year after the surgery. Eventually, after months of therapy, I was able to move about in a limited way."

Wright disclosed that apart from the trauma, pain and devastating effects the accident has had on her, it affected her children even more, as they were unable to process the event that could have taken their mother's life.

"Luckily, I was still on salary at the company I worked for during my period of illness. My only problem was the pain and suffering I experienced. I still feel cramps and stiffness in my arms and feet," she told The Gleaner.