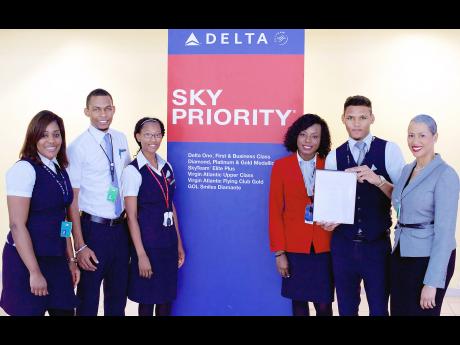 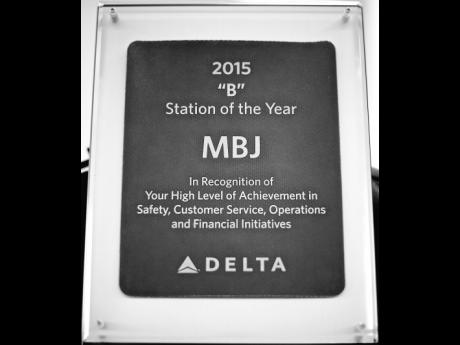 Contributed
Inset: The Category B Award now proudly sits on a wall at AJAS Montego Bay.
1
2

Delta Airlines, Montego Bay, has won the Station of the Year Award 2015, in Category B stations, for the first time in its history of operating in Jamaica. They beat several other Category B stations internationally - annually, one from each of the five categories receives such an award.

Delta is handled by AJAS Aviation Services, Jamaica's premier provider of aviation services in both above-wing and below-wing functions and cargo handling for more than 30 airlines; in 2015, AJAS handled more than 1,600 Delta flights. Station manager Saher Zawaideh is happy about the award.

"I am glad that Montego Bay has won the Station of the Year Award; this great result could never be achieved without your dedication and commitment to the Delta operation. On behalf of the team in Montego Bay,

I extend my sincere appreciation to the management and employees of your esteemed company for a job well done," Zawaideh said.

AJAS Managing Director Barry Byrne congratulated the team, describing the award as a monumental achievement and fitting for the hard work and dedication they have displayed in providing the foundation and support to the AJAS team throughout the year.

In an email interview with The Gleaner, Byrne said, "The Station of the Year Award goes to the station after key performance indicators have been examined. Stations are categorised based on the size of their operation, with Category A being the hubs, while Category B through E handles one to six flights weekly.

Byrne is proud of the AJAS-Delta team's dynamism and industrious commitment which led to the award. "Your stellar performance, among other recent notable achievements, is a testament to the morale and dedication of team members since AJAS came under new ownership and leadership in July 2013," Byrne said.

"With such a cohesive team, AJAS will be the best aviation service provider within the region. The mission to deliver high-quality service to our customers is underpinned by the company's core values of safety, security, service, communications, respect and leadership," he added.

The team has been on a high since the award was announced, and all of the AJAS family are immensely proud of their accomplishment. Already, individual team members are exhibiting an air of quiet determination that they have no intention of relinquishing their coveted prize.

Francine Haughton, business liaison manager, says the achievement is a significant morale booster which tells the staff that they are doing the right thing. "It was a challenging year for AJAS, but we are now determined to maintain the high standards we have achieved," said Haughton.

This year AJAS celebrates its 75th anniversary of operations as an aviation handling company. The relationship with Delta is entering its third decade, and during this period, both companies have surmounted many challenges and enjoyed many rewarding moments.

AJAS has given its assurance that it will continue to provide exceptional service to Delta Airlines, which it holds in the highest esteem as a most valued partner.

To show its appreciation for the achievement, AJAS rewarded the team with an appreciation party recently when they were feted and outstanding performances, including the Delta award, were recognised.