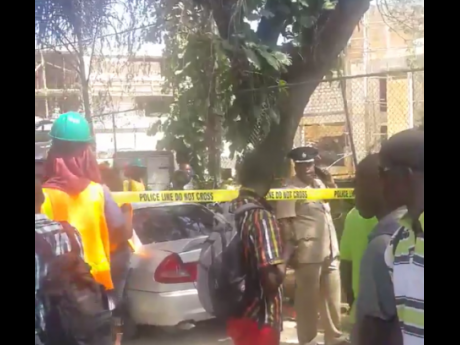 Image from video grab
Police cordon off a section of the construction site at the Royalton hotel in Negril, Hanover, where a section of a building collapsed this morning.

WESTERN BUREAU:
President of the Negril Chamber of Commerce, Lee Issa, has called for a speedy investigation and full disclosure of the circumstances under which the scaffolding at a section of the Royalton hotel construction site in Negril, Hanover, collapsed this morning, injuring five men.

Describing the incident as unfortunate, Issa said he hopes the inspectors will undertake the investigation with a view to ensuring there is not a repeat of the incident. "We need the building inspectors to do a survey and make a report.  That’s why these people are being paid – to do a job, and whether they have not been doing their job at the present time, is something that the investigation would show up," Lee said.

The incident took place shortly after 6 o'clock this morning. IN PHOTO: Construction workers among curious onlookers at the site - @Lgrandison photo via Twitter

Four of the workmen were rushed to hospital before the arrival of the Emergency Medical Services, while a fifth man was pulled from the rubble by the first responders shortly after 7 a.m.