All set for festival queen contest 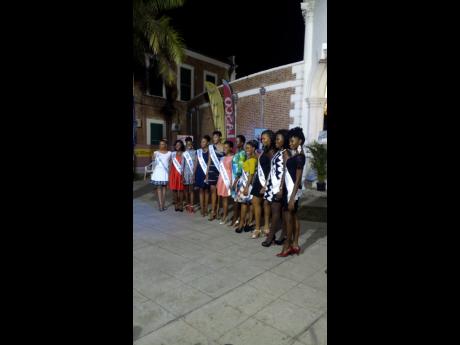 The contestants were presented at a mayoral reception and sashing ceremony held recently at Emancipation Square in the town.

According to the Jamaica Cultural Development Com-

mission's parish manager, Vennessa Patterson, there is tremendous enthusiasm among the girls who are from different communities in the parish.

"The young ladies are ready to go," said Patterson. "They have received the sash of their sponsors. We are fortunate to have such a deep field of contestants. Whoever wins will represent the parish effectively at the national level," she told Rural Xpress.

"Some of the contestants are university graduates, while some are still attending. They have shown evidence of being able to compete at the highest level. They are very involved in their communities," she said.

While recognising major sponsor St Catherine Co-operative Credit Union and associate sponsor Jamaica Energy Partners, Patterson said: " I would love to see a more active involvement on the part of the St Catherine business community in its support of the parish festival queen show."

The winner of the contest will move on to compete in the national final against contestants from parishes islandwide. They will be judged on their cultural awareness, community involvement and talent.