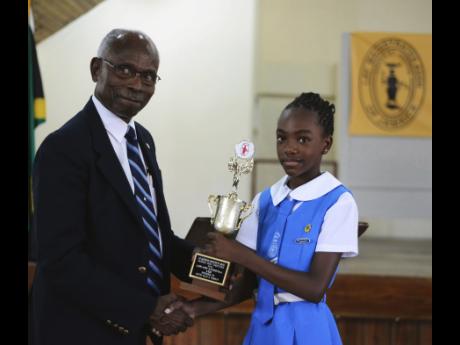 Gladstone Taylor
Hugh Perry, president of the Lay Magistrates Association of Jamaica, presents Lori-Ann Atkinstall with the first place trophy on Wednesday at the Saxthorpe Methodist Church in Kingston.

Ann-Jean Atkinstall was not at all surprised when her 11-year-old daughter emerged the winner of the 2016 Lay Magistrates Association of Jamaica National Essay Competition.

Lori-Ann Atkinstall of the Jessie Ripoll Primary School in Kingston was among some 200 students who entered the competition looking at the topic 'In 2030, you will be in your 20s. What kind of Jamaica would you like to see during that time?'

Speaking with The Gleaner following the awards ceremony, which was held at the Saxthorpe Methodist Church Hall in St Andrew on Wednesday, Ann-Jean said she has always admired her daughter's level of self-discipline and determination to achieve greatness.

"Lori-Ann works hard. Anything she sets her mind to, it will be done. She heard of the competition and she expressed her interest, and she did all the research with little or no help from myself or her dad," the proud mom said.

"When she did the draft of the essay, that was the time she asked me to look at it. Today, I'm feeling extremely proud because she worked hard. I expect nothing but the best from her," Ann-Jean continued.

Lori-Ann, who is hoping to gain a place at Campion College in St Andrew, said the competition created an avenue to garner new skills and gather new information.

"I was interested in the competition because I wanted the experience and the exposure. The preparation process was good. I learnt new things and I enjoyed the challenge.

"When my father told me that I won, I was pretty shocked but overjoyed. I'm grateful for this opportunity," she said.

Her father, Wayne, was similarly ecstatic, noting that it was imperative that parents give their children the necessary guidance and support as they pursue their studies.

"I make sure that I am present at every function that she is a part of because it is extremely important that they get the guidance and that they are aware that you are there for them. Lori is extremely driven - very shy but she speaks when she needs to," he said.

"Today is a good day and I am really proud of her," he added.