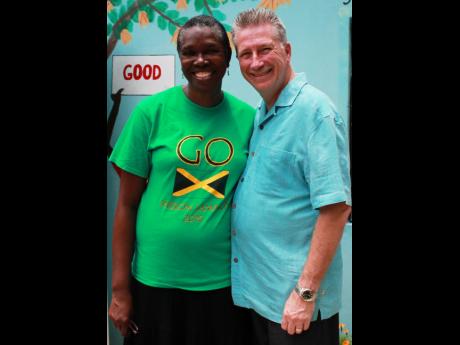 For the past two and a half years, Danny and Grace Myers of Warm Whispers Ministries have worked diligently to regenerate the largely underdeveloped community of Oracabessa, St Mary, where their youth centre, Spicy Grove, is based.

United States-born Baptist minister Danny launched the project in 2011 to improve the lives of young people in the area, but acknowledged that it was unlikely that the initiative would have been so successful had it not been for a chance meeting with Grace, three years later.

He told Family and Religion: "In 2010, I sold everything I had and cashed in my retirement to purchase [the Spicy Grove] property for the youth and children of Jamaica. I left my family and, with their blessings and encouragement, came here, alone, to do this ministry.

"I went through a divorce and after I was here, the Lord knew what I needed and sent Grace Taylor. She's been a real blessing to me and added so much to the ministry. I don't know if I could continue doing this if it wasn't for her."

While Danny's model has proved successful in attracting support from missionaries and international sponsors, last week, the husband-and-wife team, who married last year, launched a new strategy, which aims to increase Jamaican patronage.

Grace, who, in 2013, relocated from Portmore to St Mary to look after her parents, explained: "Be a Jamaican Helping Jamaicans' is our latest programme, which we launched to get other Jamaicans, both here and overseas in the diaspora, to be in partnership with us to help our children and youth in this community.

"Previously, my husband, his friends, family, and the people he knows in the United States have been supporting this ministry, but we've been saying that Jamaicans are proud people who have resources and want to build their communities.

"We know that in the diaspora in the United States, Canada, and the United Kingdom, there are lots of people who have formed groups and are willing to support what we're doing, so it's just a drive to get Jamaicans, both at home and abroad, really involved in our programme here at Spicy Grove Youth Centre."

Grace said she believes her union with Danny is destined to enhance the prospects of the young children and adults living in the area.

She said: "Our main focus is to empower the people. Even right now, that's what we do with our child sponsorship programme, which is designed to give [local parents] something in their hands for their kids, whether that is uniforms or daily taxi and lunch money. What we're really aiming to do is help them to help themselves because we think people have the ability to do that. We're just trying to unearth the potential and build them in terms of providing them with the appropriate skills and start-up resources."

For more info on Danny and Grace's work at the Spicy Grove Youth Centre in Oracabessa, St Mary, visit http://spicygrove.org/