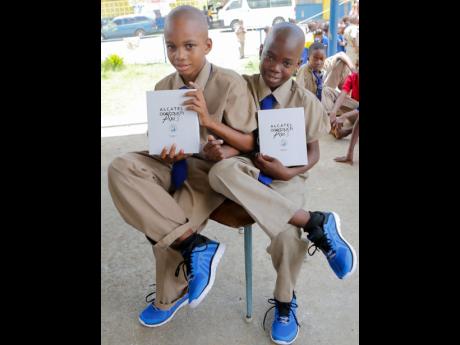 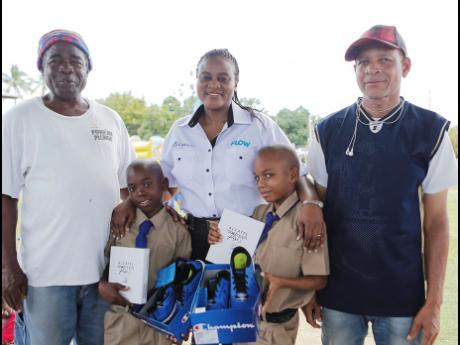 Rohan Lynch and Omarion Scott found their way into the hearts of many when their story of genuine friendship was published in The Gleaner's Rural Xpress on Thursday April 28, 2016, highlighted Rohan's kindness to his best friend, Omarion in sharing school shoes with him. In the mornings before school the boys would switch shoes at the school gate as Omarion had outgrown his only pair. Rohan took it upon himself to offer to exchange shoes so both could be comfortable.

So touching was the gesture, it inspired corporate giant Flow. A team from the company paid the boys a visit and brought them some goodies recently.

It was like Christmas at the Effortville Primary school in Clarendon when the team arrived bearing gifts. All the students were treated to cake, ice cream, and bounce-about rides.

Omarion and Rohan each received a tablet and a pair of sneakers, books and other school supplies. A commitment was also made to support both boys financially.

"Their story was so inspiring that as an organisation we wanted to be a part of this. When we heard the story we thought this is what true friendship really means; this is what genuine kindness is all about. We wanted to reach out to recognise the boys to let them know they are doing a good thing and to say, this is an example worthy for others in the school, community and wider environment to emulate. This is the perfect example of what the Bible talked about when it said, 'a child shall lead them'."

NO FUSS OR FIGHT

Rohan's father, Gary, told Rural Xpress that he thought it was a good idea for the boys to exchange shoes, even though he had no idea they were doing so before the story was published. "If everyone was like these boys everything would be alright; there would be no fuss or flight."

Meanwhile, Omarion's grandfather Harris Fullerton said he was extremely for the assistance as he often struggles to find a day's work to provide food for Omarion and his sister for whom he has sole responsibility.

Principal of the school, Adrian Sinclair was delighted to have the Flow team treating not just Rohan and Omarion, but all the students at the school. "Today I am lost for words. It is a great feeling to know that a big corporate company such as Flow was able to recognise the kindness of these two boys and decided to come out as a team to celebrate children's day at the Effortville Primary School," he said.

"These boys were being assisted by the James and Friends Education Programme, with lunch money but there is so much that foundation can do for each child as it sponsors over 100 other children to go to school."