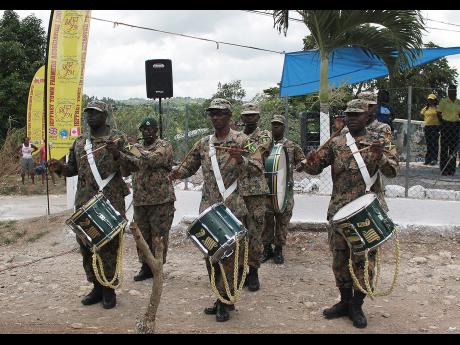 Orantes Moore
The Jamaica Defence Force’s drum corps was part of a series of events that took place in Jeffrey Town, St Mary, to celebrate the anniversary of the Jeffrey Town Farmers’ Association. 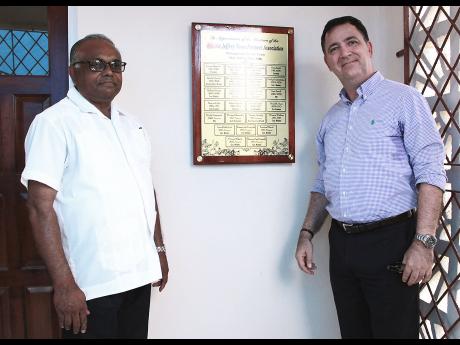 Canadian High Commissioner to Jamaica Sylvain Fabi has praised a pioneering group of St Mary-based farmers for their endurance, ingenuity, and success in raising awareness about the dangers associated with climate change.

Over the past two years, the Jeffrey Town Farmers' Association (JTFA) has won a string of awards and honours for helping to transform their community into one of the country's leading, sustainable agriculture development projects.

Speaking recently at the JTFA's 25th anniversary celebrations in Jeffrey Town, Fabi said he was particularly impressed with the group's solar-powered catchment system, which provides local residents with a constant supply of clean water.

He told The Gleaner: "Today, we're here to celebrate the anniversary of the JTFA and recognise the work Canada has done through the development projects here in Jeffrey Town.

"We've contributed significant amounts of money, around J$65 million, and the project's basic objectives are to rehabilitate and build climate resilient infrastructure, improve food security and income-generating opportunities, especially for the poor and vulnerable, and enhance the awareness capabilities of the Jeffrey Town area to adopt gender- positive practices," he said.

"We just did a tour of some of the infrastructure that was built to resist water erosion in case of a drought, and these projects are successful. They are continuing projects, and there is a lot of education and sharing of knowledge and best practises. I'm very satisfied from the point of view that what Canada has contributed has served a good cause and is actually useful and sustainable."

He explained: "Twenty-five years is a milestone because apart from schools and churches, it's very rare to find a community-based organisation that is driven primarily through volunteerism that lasts that long. I think the average span is about three years, so 25 is a real achievement.

"It takes strong leadership to be successful and none of this would have happened if the group didn't have a series of tremendous groups of individuals. Recently, the JTFA has been led by [Wordsworth and Ivy] Gordon who have been able to draw around them a cadre of amazingly strong and talented community members who sacrifice to bring development to the community."