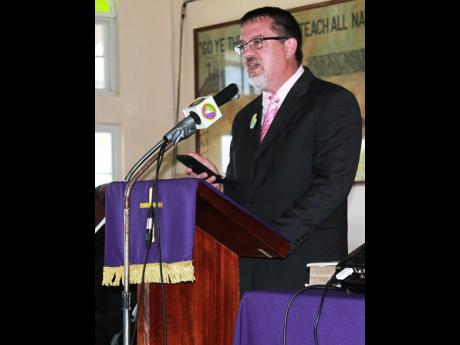 Orantes Moore
A section of the crowd which gathered at the memorial service for US missionaries Randy Henztel and Harold Nichols who were killed earlier this month. 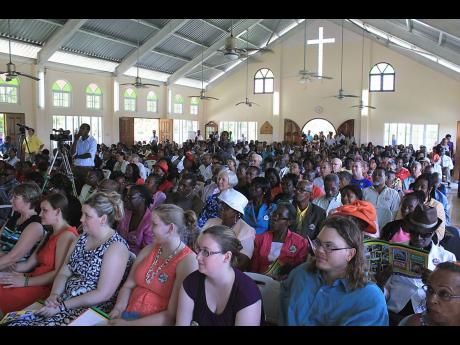 Orantes Moore
A section of the crowd which gathered at the memorial service for US missionaries Randy Henztel and Harold Nichols who were killed earlier this month.
1
2

Last weekend, hundreds of mourners travelled to the Boscobel United Church in Boscobel, St Mary, for the memorial of United States missionaries Harold Nichols and Randy Hentzel, who were murdered four weeks ago, just outside the parish capital, Port Maria.

After an opening prayer from Bishop Michael McGregor of the Bible Training Centre of Jamaica (BTCJ) and the eulogy by Custos of St Mary Errol Johnson, a witty, but moving tribute was offered by the head of the US charity where the popular ministers volunteered.

Director of Teams for Medical Missions John Heater said: "My first thought of Harold, or 'Brother Nic' as he is often known, is that he is a 'Jamerican'. He assimilated well in Jamaica. He loves Jamaica and her people, and this was home to him.

"He built more than 60 houses and continually followed up with the recipients on a regular basis. House building was part of his repertoire and relational ministry; it was building homes and families.

"He delivered food, visited shut-ins, and provided transportation on a regular basis. He was a surrogate father to the Bible Club kids and a father, mentor, and life-coach to the 20-somethings who came through the Bible Club ministry.

"He was our field director, the person who ran the ministry here in Jamaica, and one of the hardest workers I've ever known. He faithfully carried out our vision and mission and was in the process of educating me about all things Jamaican."

Heater continued: "Randy's main ministry for teams was in the area of the BTCJ. Along with [his wife] Sara, he founded the school, and because of Randy, 23 graduates graduated in October of last year, and the second class will be graduating in November.

"He would visit and tutor students at their homes, and as a result, 17 of those graduates became part of the leadership team that is now helping to run the BTCJ. Randy was always thinking, rethinking, revamping, refining, and creating, and always about five steps ahead of the rest of us.

"As clinic coordinator, he was always seeking to come up with ways to make the clinic run smoother and be able to meet more needs in the process. He was one of the smartest guys I know - a man of conviction, compassion and character."

Concluding his homage, Heater told the congregation, which included the deceased men's widows, Sara Hentzel and Teri Nichols, and National Security Minister Robert Montague, that his organisation was determined to remain in Jamaica.

He said: "As a ministry, we are staying. We are going to limp for a while, but we are praying that God will give us direction on how to proceed forward and how to begin filling some of these holes.

"We'll never be able to replace Harold and Randy; we wouldn't even try. But we do want to honour them and their service, sacrifice, passion, and lives. We love Harold and Rand, and are looking forward to the day when once again we'll be with them."