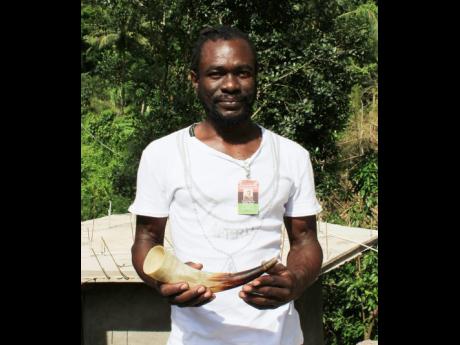 Orantes Moore
Maroon colonel of the community in Scott’ Hall, St Mary, Rudolph Pink, holds an abeng, which his people have used to communicate with each other for the past 400 years.

Following a discreet poll held just over a year ago, the Maroon community of Scott's Hall, St Mary, elected affable builder Rudolph Pink as their new colonel in a landslide victory.

Pink, who lived in Britain for 16 years, working first as a cleaner before becoming a small business owner and landlord, believes the primary reason local residents elected him is because they are happy with the developments he has instituted since returning to the community two years ago.

During a brief tour of his semi-constructed buildings, which include a museum, a community centre, and an Internet cafe, Pink told Rural Xpress: "I became colonel because since coming back from London, I've been putting back into the community, free of cost and without charging anything.

"I built a water catchment so 10 or 11 households along the Scott's Hall road can have access to a standpipe in the community, and did all the plumbing myself. I didn't put myself forward to be the colonel. The community likes what I'm doing and said they needed somebody to lead.

"There was a colonel here for 32 or 33 years... they held several meetings and called a vote with me and two other candidates. 50 people took part: 47 voted for me; two voted for another person; and the third guy got one vote."

The Maroon community in Scott's Hall dates back more than three centuries and is rich in authentic cultural and historic value. As a result, Pink is confident the area has huge potential to be developed into a tourist attraction.

He explained: "The plan is to make Scott's Hall Maroon Town look like and known as a town because it's the only place in St Mary that's actually named as a town. It's a very important place because it used to be the courthouse for the Windward Maroons of Moore Town, Charles Town, here, and the Cockpit Country.

"Also, the hospital for the Maroons used to be here. When the war with the British was taking place, the Maroons would leave Portland and use tunnels to get to St Mary. They would drop out at the Grandy Hole Bridge [on the Junction Main Road] and come here to heal themselves."

As the community prepare for their annual celebration on August 1, Pink notes that although the event commemorates the signing of the first peace treaty with the British in 1738, the Maroons are still waiting to receive many of the benefits they were promised as part of the deal.

He said: "According to the treaty that was signed, we should have certain lands, privileges and immunities. But to date, here in Scott's Hall Maroon Town, we are still paying taxes, which we shouldn't be.

"I'm not against paying taxes because we need roads and schools for our children, but it could be halved. We are not greedy or trying to avoid paying, even though we know these things are owed to us. We just want to be more comfortable and able to relax our minds so that our lives can be more joyful."