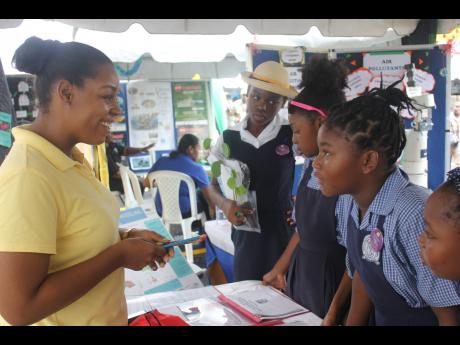 Jamaica's endangered species such as the Queen Conch and the yellow and black billed parrots, which have been targeted for illegal transboundary trade were the focus of a discussion at the National Environment and Planning Agency's (NEPA) Open Day and Environmental Fair held last Friday.

Yvette Strong, senior manager in the Conservation and Protection Subdivision at NEPA said that the Wildlife Trade Policy was conceptualised in a bid to fill the gaps in existing environmental laws in protecting endangered species.

"There are currently several legislation that deal specifically with wildlife such as the Wildlife Protection Act and the Endangered Species Act however these Acts do not address several issues related to the domestic and international trade in endemic plants and animals and their derivatives," Strong said.

She further explained that the Wildlife Trade Policy aims to ensure there is a system in place to ensure the sustainable use of wildlife and regulation of the trade in wildlife. This will be achieved under the policy through improved enforcement of wildlife laws, developing procedures for determining closed seasons for species, stakeholder engagement and public education.

Strong noted that while the policy has not yet been finalised, certain aspects of it is being implemented in the interim.

"So far we have prepared a toolkit for one of our major stakeholders, the Customs Agency - which will assist them in minimising the illegal import and export of wildlife through our ports. We are also building the capacity of our Game Wardens and we have engaged in public education activities at the community level," Strong said.

The Wildlife Trade Policy was one of the major talking points during the Agency's celebration of National Environmental Awareness Week, which was commemorated June 1-5 under the theme 'Illegal Trade in Wildlife: Let Us Stamp It Out'. The celebrations began on Friday, June 3 at the Agency's head office at 11 Caledonia Avenue and will continue with a church service on Sunday, June 5 at the Bethel Baptist Church in observation of World Environment Day.