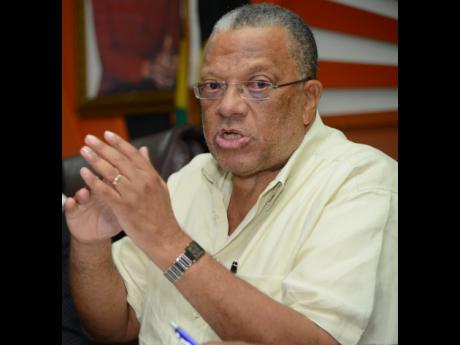 In blistering criticism of the Government's performance so far, Opposition Spokesman on Finance Dr Peter Phillips has said the Andrew Holness administration cannot point to any success since it took office.

Reeling off a series of People's National Party successes - starting with its founder to present - Phillips said recent reports of a three per cent downward trend in inflation, which continued into April, was as a result of the stewardship of the economy by his administration.

The former finance minister, who was addressing the Linstead division fund-raising dinner in Bog Walk, St Catherine, last Saturday night, turned his focus on the Government.

"We were told it would happen on April 1; it didn't. Budget come and gone and nothing has happened. The reality is it will not happen."

Opening the Budget Debate last month, Finance Minister Audley Shaw revealed the Government had amended its election promise to remove income tax for persons earning $1.5 million or less. Instead, Shaw announced that Government would increase the income tax threshold for all PAYE workers to $1 million, and introduced a $13 billion tax package to make up for the projected losses to its coffers.

The threshold, he promised, would be increased further to $1.5 million at a later date.

On the weekend, Phillips criticised of institutions, including the media, which he claimed did not help to educate the masses as to the unrealistic nature of the Jamaica Labour Party election promise.

He asserted that it was the responsibility of all - those who make promises and those who don't - to be accountable.

He said individuals and groups should have given more serious consideration to the promise.

"We can say it is a learning moment for the country," said Phillips.

The opposition finance spokesman noted that the recent tax package announced by the Government has started to have harsh effects on everyone, especially the poor.

Meanwhile, Phillips reiterated the Government's failure to deliver on its promises during an address to Comrades at the York Town Divisional Conference in Clarendon Sunday night. He noted that the growth and prosperity that were faithfully promised to the people of Jamaica have not materialised, and instead the Government has unleashed a wave of inflationary pressures and price increases which are evident in the rise in the cost of fuel and basic food items such as chicken.

Mayor of May Pen, Councillor Scean Barnswell, also strongly disagreed with political pundits who have given the JLP high marks for its first 100 days in government, arguing that it had not delivered on its election promises.