'This is my lowest point' - Blind, ill man pleads for help to end suffering 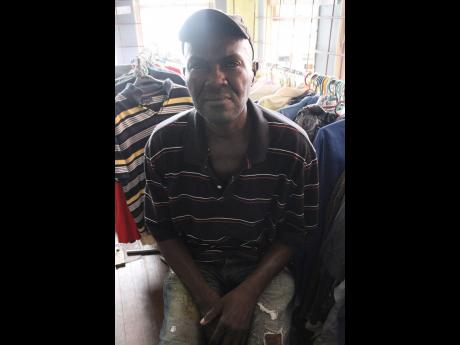 Forty-six year-old Keith Stewart of Bog Hole, St Ann had no idea that at this stage in his life he would become totally blind with several terminal illnesses and dependent on others for help.

Having been diagnosed with diabetes for approximately 18 years, Stewart told Rural Xpress that his woes began more than two years ago when he became fully blind.

"One day after I leave church, me reach home and say me a go help cook and me just see like a cloud come over me eye and that was it ... all di doctor me been going to, nutten. One a di doctor up at university tell me say it wouldn't get any worse, him say me wouldn't be able fi see fine writing.

"Me tell him just do all you can do fi mek me see, and him tell me fi come back, but every time di appointment come 'roun me get call and dem put me off until me sight go weh completely," Stewart said.

He explained that he has been staying with his nephew at a house that belongs to his sister, but fends for himself for the most part.

The former mechanic who worked in the field for more than 12 years revealed that he can no longer afford to feed himself as he should, having blown through all his savings.

"I have a real problem, I should take the insulin twice per day, but sometimes me can only tek it one time because me can't tek it when me hungry, haffi tek it wid food in my system ... I was a contracted worker and I got laid off after a while, I looked for jobs, but nutten, and then all a the likkle money weh me have use up, now me cyan work at all," Stewart lamented.

He added: "Me get $2,000 every two months from the PATH programme, but me haffi pinch it and it still cyan stretch ... me nuh want di help, me need help."

In addition to being diagnosed with diabetes, Stewart is hypertensive, has high cholesterol, poor circulation of the blood.

"This a me lowest point, I have been to the councillor and the MP for help and dem tell me say a nuff somebody inna di line, me call round and everything, but I don't know... my brother give me the permission fi use him land build pon so if me coulda get some help I woulda like build a one room on it and get somebody help me wid food or financial aid and little company," Stewart told Rural Xpress.

He continued: "Some things me can't do by myself enuh, I need help. Right now a me wash me clothes, me nuh know if dem wash to your suiting, but a me haffi wash it but me haffi ask fi help fi pin dem out," he said.