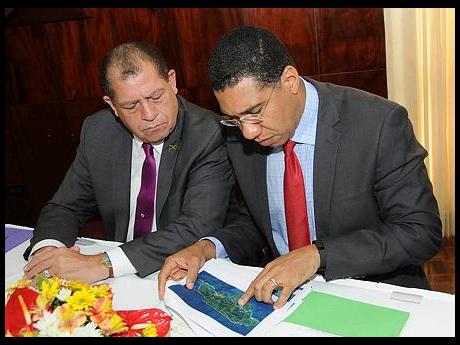 Prime Minister Andrew Holness has confirmed the scrapping of the plans announced under the previous administration  for the South Coast Highway from Harbour View in Kingston to Port Antonio in Portland.

But he says a road improvement project is still on.

Holness made the confirmation at a press conference this afternoon, a day after the Finance Minister Audley Shaw said it did not make "economic sense" to pursue the originally announced highway project (Phase One) from Harbour View to Morant Bay in St Thomas.

According to Holness, under the reviewed road project, there will be a four-lane highway from Harbour View to Bull Bay while the road network from  Bull Bay to Morant Bay will be upgraded.

"It's a better plan," Holness said.

"It gives access, it gives a better road, reduces cost and still achieves the objectives that we want," Holness said.

Meanwhile, Holness told journalists that the Government has finalised funding amounting to US$326.5 million for the improvement works.

The full cost of the project will be US$384 million funded mostly through a loan from the EXIM bank of China.

Jamaica will be responsible for finding US$57 million. Reacting to Shaw, Warmington told The Gleaner/Power 106 News that as the state minister in charge of works, he was the only one mandated to announce the fate of the South Coastal Highway.