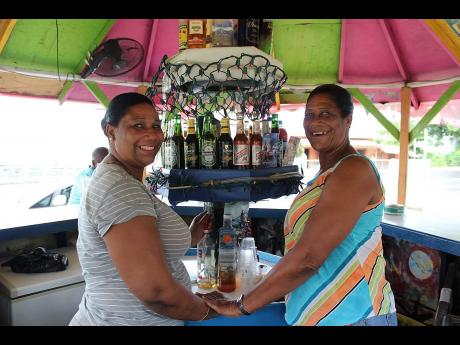 Orantes Moore
Sisters Luma and Maureen Medwinter (right) have worked closely together for the past 40 years, running the L&M Fast Food and Bar in Boscobel, St Mary.

For almost 40 years, Luma and Maureen Medwinter have worked closely together, running a small, friendly roadside venue, L&M Fast Food and Bar, in the coastal district of Boscobel, St Mary.

The jovial siblings hail from a large but closely knit household consisting of two brothers and five other sisters, and claim the key to developing a strong family unit is to avoid sibling rivalry at all costs.

Speaking earlier this week, Luma told Family and Religion: "Working with your sister is good because we stay together, so we do things together. We have our ups and downs, but we try to overlook any problems. Something might happen and you make a little deal out of it, but after that, everything goes back to square one, lovingly. It can be difficult, but you have to try and do your best."

Maureen, 55, adds: "I think because we were all very close when we were growing up, we stick tightly together, so we've never really had a big falling out. The most important thing is to stick together, stay together, and love each other. We have good times and bad times, and sometimes we just sit down together and talk about the past."

Luma, 51, says that although most of her time is spent working with Maureen, she maintains a similarly close relationship with each of her other siblings.

She explained, "We don't keep friends, so we don't really know about anything that's going on outside because we're all together. We have associates but not friends because there are enough of us, so there is always someone to talk with if something happens to you."

Maureen and Luma arrived in Boscobel from the nearby district of Mango Valley when they were ages 17 and 12 years old, respectively. Both have happy memories of this period, but admit they often found themselves in trouble.

Maureen said, "My childhood was bad because we were very rude (laughs). [Me and Luma] used to go onto our cousin's land and t'ief out his cane. Then we'd find some banana and coco, and we'd go to the river and cook."

Luma remembers, "We'd go to the river when we were supposed to be in school, and when we came back home, Mummy would have a guava whip ready, waiting for us (laughs). We'd try to hide under the bed, but she would grab us.Then you would hear my father say: 'Stop beating the child', and she would say 'Get out of the way before you get yours (laughs)'."

Maureen recalls, "Luma has always been unruly, even though she was younger. Whenever we were going to a party, she'd be following behind us and would want to know everybody's business and everybody's boyfriend (laughs). Because of that, we called her 'collar' because that's what you had to put on her to get her out of your business (laughs)."