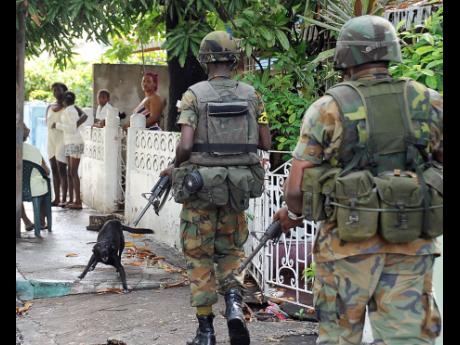 The Jamaica Defence Force (JDF) says it supports the recommendation by the West Kingston Commission of Enquiry for further investigation into allegations against members of the Force in relation to the 2010 police-military operation.

Last evening the JDF released its first official response since the report was released last week.

In its statement the JDF says it has done a preliminary review of the report.

And it says it believes the report of the commissioners is comprehensive and outlines to a large extent the historical account of what happened leading up to and during the May 2010 operation.

It says it supports further investigation into allegations against members of the Force regarding actions which are inconsistent with the standards of conduct expected of members of the Jamaica Defence Force.

However, the JDF says the findings and recommendations with respect to the use of mortars are under review.

It says the commissioners’ recommendations regarding the procedures governing internal security operations will inform its ongoing deliberations.

In the meantime, the JDF is urging all Jamaicans to take the time to read the full report or at least the key findings highlighted in each chapter, in order to fully appreciate the circumstances of 2010.

The JDF says it will continue to collaborate with the Jamaica Constabulary Force to confront the current threats to the collective security of Jamaicans.

In its more than 900 page report, the West Kingston Commission of Enquiry decried the use of mortars and recommended that some members of the police and the army who were in charge of the operations should never again be involved in such undertakings.