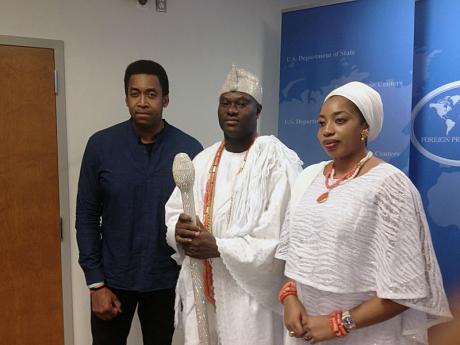 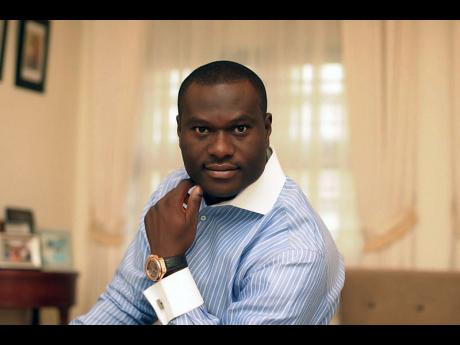 The new face of African kingship, His Imperial Majesty Oba Adeyeye Enitan Ogun, Ojaja II, the Ooni of Ife, recently unveiled a radical message to black people around the world: "Educate and empower your people, especially the youth."

Amid throngs of onlookers, and shielded by a suffocating security detail, the Ojaja II 100-strong delegation included scores of kings from the Royal Court of Ife in the Osun State, Nigeria.

Earlier, traffic crawled along 1st Avenue in New York City as he made his way to New York foreign press.

Ojaja II's coronation last year at the young age of 39 ignited discussions over social media, as millions hailed his youth, vision, and ability to articulate a new path for Africa and the diaspora.

The young king shoulders enormous responsibilities as the traditional ruler of lle-Ife, the Nigerian city known as the cradle of the Yoruba people and the Orishas.

"All praise must first be bestowed on the King of kings," he said, alluding to Oludumare, the supreme being in the Yoruba cosmology.

"My objective is to revive the heritage, culture, and tradition of the black race the world over. The time has come and the conditions are right for us to come together as a formidable force," said Ojaja II as he opened with an assurance that belied his youthful countenance.

Invoking the glories of pre-Colonial Africa, he said the people of the African continent were unrestrained by boundaries and coexisted despite what has been taught.

REMINDER FOR THE DIASPORA

He condemned today's artificial markers and reminded the black diaspora of the strength, survival, continuity, and relevance of the African kingship despite the ever-changing social and political dynamics.

"All the holy books mention the divinity and the guiding light of the Kingship, be it the Bible, the Koran or the Torah. This is very meaningful."

He then pointed to the unique quality of the African kingship.

"We have been around many thousands of years and, you should know, it is still very alive and robust despite efforts to marginalise it. It must be used in an effective way to support governments and create stability around the world as it was used in the past."

Later, he lauded the diaspora's unbreakable bond to the African continent and conveyed his unequivocal aspiration.

"I have come to invite Africans and the 40 million blacks taken out of the continent and now living in the Caribbean, Latin America, North America, and South America to embark on a new agenda that puts business, culture and our youth first."

His Majesty is well known for his entrepreneurial vision and accomplishments.

He is the founder and chairman of Gran Imperio Group, the holding company of real estate and construction, manufacturing, facilities management, leisure, and tourism companies in Nigeria.

However, it is his diaspora message that is catching the attention of world leaders.

"Africa is the epicentre of the world and a broken continent is ominous for global peace and stability." He argued.

"Africa is the richest country on the face of the earth. It is the source of the world. If the river rejects its source, it will eventually dry up," he asserted, injecting age-old philosophy to cement his point.

And showcasing his keen understanding of African history, he briefly discussed the Islamisation of North Africa, the resistance of Ethiopia against European colonisation, Benin and the slave trade, and the roots of Apartheid "that locked down South Africa from the rest of the black world".

According to Ojaja II, Nigeria and Ghana were the gateways to the diaspora.

The king went on to marginalise exterior difference among black cultures. "While we might be different on the surface, there are fundamental similarities among Yoruba peoples all over the world, as we can see in religious practices throughout Brazil, Cuba, Jamaica, and Trinidad."

Eloquent and never short on words, he cautioned that individualism and modernity should not distract youths from learning and upholding the core principles of humanity.

"I make it a point to know and interact with everyone living in the Kingdom, and that's no easy task. At times, I use public transportation and ride my bicycle. No one should raise themselves above others because God will put you down. When you humble yourself, you will be raised up."

He called himself a champion of youth causes because "no one is speaking on their behalf. While we must revere our elders and ancestors, no one knows what our youths will become if left to their own devices. That is why we must be there to offer guidance and knowledge, so they can compete and excel in this fast-paced world".

He has taken this message to the annual Odunde Festival in South Street, Philadelphia, the historic neighbourhood home of African Americans.

During his short stay in New York, Ojaja II was flanked by as many as six kings, all of whom were visibly older.

This, he viewed, as testament that his message of youth empowerment has resonated throughout his kingdom of close to 200,000 people.

"I respect the wisdom and spiritual training of all these revered elders, but the respect is mutual and so is our unity and belief that the theme of black empowerment has arrived."

When asked how the Orisha faith can promote environmental consciousness and put an end to black-on-black violence, he invoked the enduring and unbending discipline that is required of a devotee.

"Our faith demands strict adherence to its teachings and principles; that is why many shy away from it."

He argued that the 401 orishas were not myths as some teach.