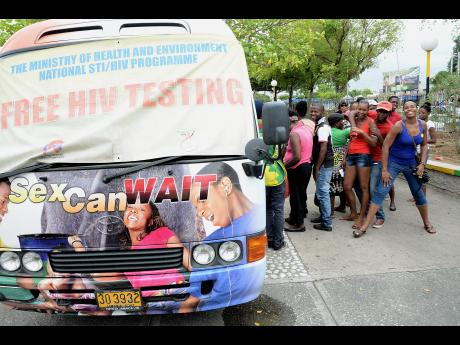 With the international financing institution, The Global Fund, set to transition its support from Jamaica come 2018 as a result of the country's middle-income status, some local groups are expressing concern that the gains made in fighting HIV/AIDS in the country will be reversed.

The Global Fund provides financial assistance to support local programmes around the world that are aimed at reducing HIV/AIDS, tuberculosis, and malaria.

In 2010, the same year, the World Bank designated Jamaica a middle-income country, the Global Fund gave the island just over US$40 million to utilise for five years.

Last year October, the country was given only US$15 million, and the funding cycle moved from the usual five years to three years.

According to Ivan Cruickshank, chairman for the country-coordinating mechanism for the Global Fund grant, after 2018, funding for Jamaica is not a guarantee.

"Jamaica is one of the countries in what we call a transition process, which means that the Global Fund has identified the country to transition out of support. At the moment, the expectation is that we will transition after this cycle of grant is finished.

"There are discussions going on now about whether that will be the case, but, as it stands, we are scheduled for transitioning out of this round of grant in 2018," Cruickshank told The Sunday Gleaner.

He said the US$15 million that has been allocated is going towards only key populations, and other donor agencies are also focusing only on key populations.

These key populations, he said, are people living with HIV, men who sleep with men, those who are transgendered, and sex workers.

Cruickshank said the concern now is that the Government might not be able to finance the ending of the AIDS epidemic when international organisations such as the Global Fund withdraw help from Jamaica.

"We have been assured that some core components will be maintained at a minimum. We know that, so we have what we call a willingness-to-pay commitment from the Government to sustain the treatment programme and so we will not see a decline in the treatment response.

"While that may be the case, we are not as confident as we would have been were we using external resources, because we know those resources are dedicated to the response and cannot be shifted to any other area," said Cruickshank.

In the meantime, Kandasi Levermore executive director of the Jamaica AIDS Support for Life (JASL), believes that Jamaica could easily see a reverse in the gains made in the area of HIV prevention.

"I can tell you for sure that an organisation like JASL cannot afford to lose international support because 99 per cent of the funding that JASL has comes through international partnerships," said Levermore as she noted that the Government usually gets the money and disperses it to civil-society groups.

"Our funding situation is not going to improve from international sources, because again, if you are upper-middle income, why do I need to pay for your people to access certain services?" added Levermore.

Jamaica just recently adopted a political declaration on HIV/AIDS to fast-track efforts to fight against HIV and to end the AIDS epidemic by 2030. But Levermore believes it will be difficult for Jamaica to reach this target given its financial constraints.

"Civil societies are now looking at their own transition plan. We are praying that it (Global Fund) doesn't go. We are advocating that is doesn't go," said Levermore.

The reduction in donor funding was one of the main reasons for the merging of the country's National Family Planning Board (NFPB) and the National HIV/STI Unit in 2013 to create a single authority for sexual reproductive health.

Director of Health Promotion at the NFPB Andrea Campbell told reporters during a Gleaner Editors' Forum last October that funding constraints have resulted in a cutback on activities.

At that time, the NFPB was able to employ only 100 outreach workers, although there was a need for 800.

Some of Jamaica's gains in the fight against HIV/AIDS

- Mother-to-child transmission was less than two per cent.

- The prevalence has declined over the last 15 years, with the 2013 and 2014 prevalence rates remaining at one per cent and below.