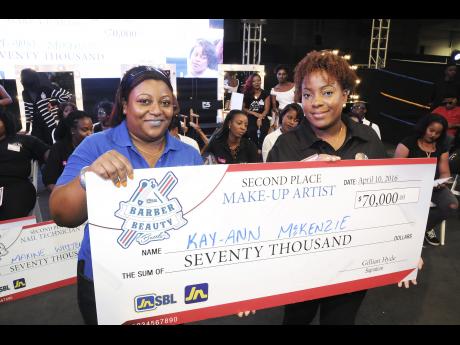 Contributed
Kay-Ann McKenzie (right), second-place winner in the Make-Up category of the JN Small Business Loans (JNSBL) Barber and Beauty competition, receives a replica of her prize money from Keisha Bent, senior manager, finance at JNSBL. The competition was held in April.

For some competition winners, donating a portion of their prize money towards the medical expenses for someone else is not the first thing that comes to mind.

However, for make-up artist Kay-Ann McKenzie, that was the first thing she thought about when she won the second place in the Make-up Category of the JN Small Business Loans (JNSBL) Barber and Beauty Battle in April. McKenzie, who has been in the make-up business for 10 years, won a cash prize of $70,000. And, from her reward, she has donated funds to underwrite the cost for a chemotherapy session for the church sister of a friend, who is undergoing treatment.

"I learnt of my church sister's friend and her undergoing treatment for cancer from a close friend, fellow make-up artist Narda Simpson, and I was truly touched," McKenzie said. "Therefore, after I won in the JNSBL Barber and Beauty Expo, I decided that I would donate a part of my winnings to assist with her expenses." She wanted to be altruistic, particularly after she learnt about the cost of chemotherapy.

"I am all for helping because of the heart-warming feeling that I get from assisting others. Therefore, once I received the award, I took out a portion to donate to her. I know chemotherapy is expensive and my contribution may be small, but I felt I had to play my part to assist," she emphasised. Gillian Hyde, general manager of JNSBL, lauded McKenzie for her altruism, stating that her actions were worthy and should be emulated.

"Her action indicates a degree of selflessness, which we should all appreciate. I am truly proud of her and wish her church sister's friend a speedy recovery," Hyde said, indicating the company would also make a contribution to support Kay-Ann's caring initiative. McKenzie thanked JNSBL for its support.

"I try to be there to lend a helping hand, because I believe there is no greater reward than being your brother's keeper."