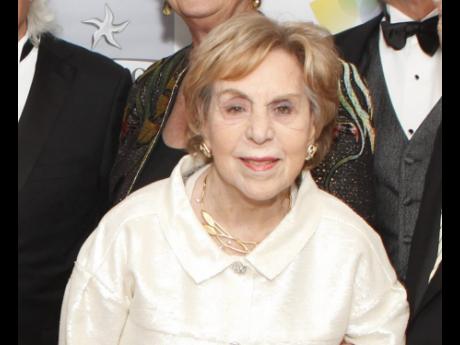 The American Friends of Jamaica (AFJ) was plunged into mourning last week with news of the death of former board member, Sylvia 'Sunny' Engel.

Engel, described by the AFJ as "the quintessential renaissance woman", died on June 21.

"Sunny Engel's love of life, optimism, and creativity were boundless," the AFJ said in a statement.

"Sunny had a zest for life and a fierce desire to enjoy every moment. She was devotedly dedicated to her family and active with numerous causes, community groups and events."

The AFJ said she looked forward to the annual visits to their family home in Montego Bay, St James, in Jamaica.

"We, her children, were worn out just watching her in action. Mom always taught us that you can do anything; if you want something badly enough, never allow yourself to be a victim," said daughter Cathy Weiss.

She graduated from Hunter College and was a microbacteriologist at Columbia Presbyterian Hospital.

She was passionate about philanthropy and served as trustee of the National Jewish Hospital in Denver, the Center for Respiratory Illnesses, sat on the New York Women's Board of Adl, Chapter and Group president of Hewlett Hadassah.

Serving with her on the board of the AFJ was Engel's husband, Sydney Engel.

The Engels have been the benefactors of programmes in health care in Jamaica since the 1990s.

MoBay Hope opened its doors in 1997 in response to the need for premium quality health-care in western Jamaica.

The goal was to provide high- quality, affordable and accessible emergency medical and diagnostic services in a primary care setting for the citizens of and visitors to western Jamaica.

"Mrs Engel showed compassion, kindness and love to all; her cause was for humanity. She was a woman of deep insights," reflected Caron Chung, AFJ executive director.

"She leaves behind an exemplary and extraordinary legacy."