We must embrace other languages - Robinson 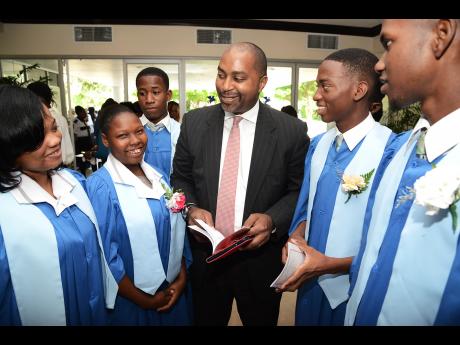 Rudolph Brown
Julian Robinson speaks to graduates of Vauxhall High School at the graduation ceremony at The Jamaica Pegasus hotel in New Kingston on Tuesday.

Julian Robinson, opposition spokesman on information and the knowledge economy, has added his voice to those calling for Jamaicans to learn a second language.

In his charge to graduates at the Vauxhall High School in Kingston on Tuesday at The Jamaica Pegasus hotel, Robinson said, "We must embrace other languages apart from English."

Prime Minister Andrew Holness, while reporting to Parliament on bilateral talks with the Cuban President Raul Castro in June, called for Spanish to be made an official second language in Jamaica. This sparked a series of debates among persons who believed that Jamaica should place more focused on perfecting the use of English instead of adding Spanish as an official language. They argued over whether Spanish deserved to be a second language, but Holness later clarified his position, saying that he was more concerned about getting a high percentage of Jamaicans to speak Spanish rather than making the language official.

On Tuesday, Robinson, stressing the importance of learning a second language, said, "It increases your marketability, not just in Jamaica but also in different locations ... it will increase your marketability beyond your shores."

However, he also highlighted the importance of being in command of English as a language in the country.

"If you don't master English, it's going to affect your performance in the world because the way you speak is the way you write," he told the graduates, adding that the knowledge of English will help people to master a second language.

A total of 160 students graduated from Vauxhall High School on Tuesday.