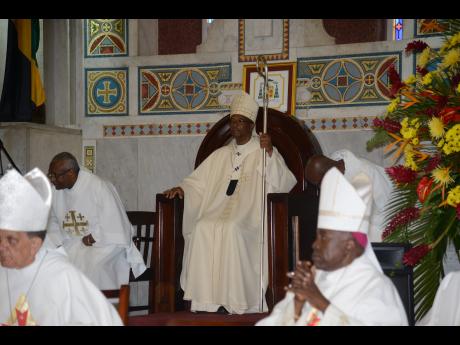 Gladstone Taylor
The Most Reverend Kenneth Richards takes his seat as the newly installed Archbishop of Kingston on Wednesday at the Holy Trinity Cathedral in the capital city.

The Roman Catholic community in Jamaica witnessed the changing of the spiritual guard on Wednesday with the installation of the Most Reverend Kenneth Richards as the seventh Archbishop of Kingston and the Metropolitan of the Province of Kingston.

Describing him as a young shepherd, his predecessor, the Most Reverend Charles Dufour, charged him to uphold the principles of the church and to be an example to the flock.

"A tall task awaits you as you lead us to a life in Christ and deeper relationship with Christ," he said.

As the papal bull announcing Richards's appointment was read, a hush went across the Holy Trinity Cathedral as the congregation leaned in to hear the words from the Holy See.

An equal sense of reverence was observed when the bull was carried around the cathedral by Father Don Chambers.

Having been escorted to the Cathedra (the bishop's throne) and presented with the crosier, it was a jubilant Richards that arose to preside over his first Eucharistic celebration as Archbishop of Kingston.

The music, the readings and the incense which filled the dome of the temple seem to announce the new paradigm which Archbishop Richards called for in his homily.

"This is the day that the Lord has made, let us rejoice and be glad in it, this is the day of the Lord," Richards proclaimed as he began a homily of poignant social commentary in keeping with the tradition of Catholic social teaching.

His first port of call was to the church itself. Pointing to the mounting criticism levelled at the church for its seeming inability to address the social ills of our times, he noted that the church had been under severe criticism.

He committed to forging a renewed partnership between the church, the state and civil society, noting that the "church must not retreat from its responsibility to the society".

Turning his attention to the political leadership of the country, Richards urged politicians to provide good leadership.