Diary of a ghetto priest | The miracle of family 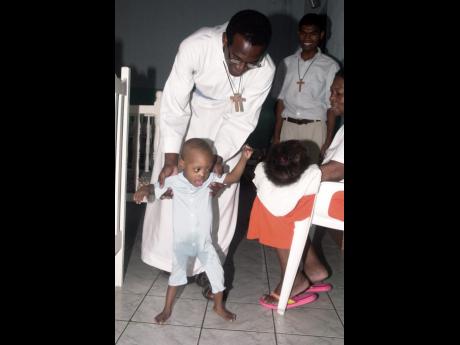 File
In this file photo one of the brothers interacts with a child.

"I was afraid but excited. Jesus made the blind see, the deaf hear, the cripple walk, the leper cleansed. There I was at Naga City, Missionaries of the Poor, Philippines. All around there were all these very people that Jesus loves, and healed, and prayed over. Here are all these people. But I was scared."

Brother Albert had come to join the Missionaries of the Poor. Caught between fear and excitement, he stood before his superior, Brother Lawrence. "Go to the children's section. Work with them according to their needs. Remember these are the little ones Jesus loves. Do what Jesus would do in caring for them," Brother Lawrence told him.

Brother Albert is tall, wiry, strong, cheerful and bright. But there he was before Brother Lawrence begging for prayers, as he knelt before him.

She was a mess. Her crib had the marks of excrement. Her hands and feet had dark brown smears. As Brother Albert turned away his face, little Emily began to stammer a cry. Brother Albert turned back to her, and lifted her into his arms. Suddenly the smell had disappeared, though Brother Albert's habit was daubed with mess. He didn't care about himself. He didn't care about his fears and repulsion. Emily had to be hugged. Emily began to gurgle in contentment. Brother Albert brought her to a tub of clean water, took off her soiled clothes, and splashed water on her. She laughed and played, splashing water at Brother Albert. Then he dried her, changed the linen and pillows, and placed the little crippled Emily in her crib.

"Then I brought food to her, porridge, crackers, a mango and a little water to drink. I sat down beside her on a stool. She became calm. I read a little story of Jesus feeding the 5,000 to her. Though Emily is only five years, yet she seemed to understand. She must keep quiet, she must listen. I kept repeating to her the name. 'Jesus, Jesus, Jesus'. She began to play with the crucifix around my neck. She asked 'Jesus? Jesus? Jesus?' I said yes.

"I began to ask, is this going to be my vocation for life? Is this going to be my commitment? A big mature man like me, doing a woman's work? Will I not be better off studying to be a doctor or a priest? What about having my own family, my own wife, my own profession, my own house, my own job? Then I looked at Emily, her eyes settled on my eyes. She held out her little hands to me. She could not walk. I lifted her up in my arms 'Brother?' the question arose in her mind once again, and stirred my heart. 'Are you my brother?'

"Many enter the profession of doctors, lawyers, nurses, politicians. Who will enter the simple profession of brotherhood? Who will become a brother to the homeless and destitute? That is the question I have come to answer, Brother Lawrence!"

Diary of a Ghetto Priest | What is a family? Where do I belong?