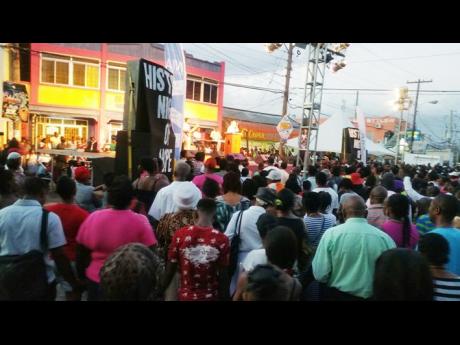 Cecelia Campbell-Livingston
A section of the massive crowd that turned out on Sunday in May Pen Square, Clarendon, for the 10,000 Men and Families March.

It was a large sea of faces on Sunday evening at the May Pen town square in Clarendon, where the 10,000 Men and Families March culminated.

The march, which was sponsored by the National Integrity Action (NIA) and powered by the Spanish Town Revival and the May Pen Minister's Fraternal, had an estimated 19,000 in attendance.

The event, which drew out a massive crowd - the largest the town has even seen for some time - proved to be a unifying force, as members from the churches in the area and nearby environs, along with the various stakeholders, came out.

It was a sight to behold as the marchers, accompanied by marching bands, made their way through the town bearing placards with messages such as 'No to murder' and 'We want back our community'.

Bishop Rowan Edwards, the main force behind the project, commenting on Sunday's march and grand gospel concert, told Rural Xpress that the initiative, which was done in Spanish Town, Montego Bay, and now May Pen, is meant to pull thousands of good, law-abiding citizens together and allow them to raise their voices against murder and other violent crimes.

IMPACT OF THE CHURCH

"The people were very excited that the Church came on board. It was great to see the impact of the Church, as many expressed pleasure," he said.

According to Edwards, the decision was taken to culminate the march in May Pen following a recommendation by the NIA and the Ministry of National Security.

"They came into Spanish Town and recognised the impact it was having on the community and said they wanted it to be replicated across Jamaica," he said.

Edwards said he is hoping a big dent will be made in crime through this programme.

"Based on where we are with crime and violence, it's a very ugly picture being painted in our country. Many are seeing this from overseas and this could cripple our tourism brand and push this country in serious problems. At the same time, God is not pleased with the bloodletting in this country. We are making an appeal to all perpetrators of crime and violence - let us stop," were the heartfelt words coming from the bishop of the Lighthouse Assembly in Spanish Town.

He said his one hope coming out of the event was that a message would be sent loud and clear that Clarendonians were fed up of the negative forces taking over May Pen and its environs.

This is the second peace initiative involving the Church that the parish has seen, all in the bid to curtail crime. In June, Operation Hope was carried out.