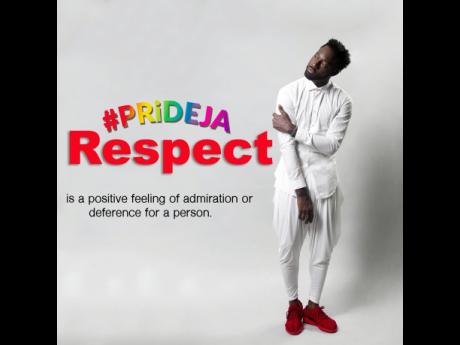 Fashion designer Dexter Pottinger is the 'Face of Pride 2016' as the Jamaica Forum of Lesbians, All-Sexuals and Gays (J-FLAG) celebrates Pride Week.

This year's celebration is themed: 'The pride of a people: Celebrating a community of love'.

Originally from the Waltham Park area of Kingston, Pottinger, who does not hide his sexual orientation, has come a long way since his first collection in 2001.

Having been privileged to travel the world and observe the attitudes of people to racial, cultural and other differences Pottinger told The Sunday Gleaner that he believes it is his duty as a human being to bring everyone together to play their part in improving the lives of the marginalised.

Since news broke that he is to be the Face of Pride 2016, Pottinger who draws inspiration from top Italian fashion designers, says he has received very positive response from persons from all walks of life and age groups.

"From executives in the bank to older women with whom I come in contact, I have been congratulated for the move. I feel honoured because of the positive feedback from everyone, it means that we are now at a certain level of maturity in our thinking about the J-FLAG community," said Pottinger.

Information from the organisation's website quotes J-FLAG's committee member and director of projects and strategy, Jaevion Nelson, as saying that Pottinger was chosen, "because of his success and his sense of pride and community (with) another big factor being that he resides in Jamaica."

Nelson added that the Face of Pride is an initiative that hopes to reduce stigma while highlighting the successes of the LGBT community in the island.

Pottinger who has evolved from a preteen designer of cheerleader outfits and garments fashioned from plastic bags, into the premier designer of men's superbly tailored suits, said he wants to shed light on J-FLAG's members and activities.

"I hope that my participation will show members of J-FLAG that it is okay to come out in an atmosphere where there is no violence, realise that it's your time to be part of the change - not just for the week but permanently as a part of the community."

Pottinger opined that the more people read about things and people they don't understand, the better it will be.

"If you look at the world right now, you will see that there is a lot of conflict between races that do not understand each other, but if we just respected and appreciated each other's differences, and loved each other, things would be better. There is no love in the human race now," he said.

Pottinger now enjoys the love and support of his parents and siblings, but admits that it was not always so.

"It was hard for me as a youngster, but now my mother understands me more and my dad is cool, My siblings are also cool with me and my brother works with me," he said in response to The Sunday Gleaner's question about family support.

With the theme of the Pride Week of celebrations geared towards love and family, Pottinger is hoping that members of the J-FLAG community will participate not only for the week, but also be a part of change going forward.

He is also reminding them that it should not matter whether you are gay, straight or bisexual, it is important to do well and excel at what they do.

"You will get a lot more respect if you aim to be financially independent," he said.