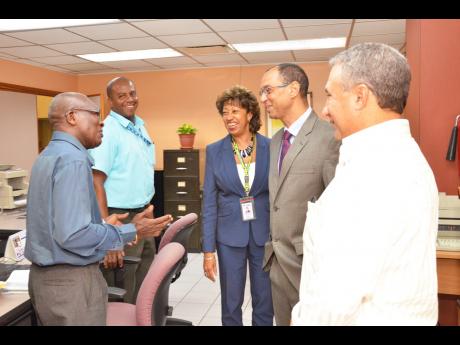 Chairman of JAMPRO, Don Wehby, announced last week that the agency's board of directors and executives would be meeting to update the organisation's focus, and create a new three-year strategic plan to support Jamaica's economic-growth programme. The retreat will be held tomorrow in St Andrew.

Wehby explained that the retreat will examine global and local trends in investment as well as export and trade promotion agency best practices.

He said the aim was to create strategies that will attract more investments in sectors such as tourism, business process outsourcing (BPO), agriculture, logistics; and increase exports of Jamaican products and services.

JAMPRO's executives will also examine the use of partnerships with key ministries, departments, agencies and councils such as the Economic Growth Council, to promote Jamaica internationally, and the progress of the National Export Strategy, which focuses on boosting exports in sectors including the creative industries, manufacturing and agri-business.

President of JAMPRO, Diane Edwards, noted the agency was keen on bringing more innovation to its operations to boost Jamaica's economy.

"As we welcome our new board and the vision of our new ministry, we thought that it was important to review the way we deliver services to the Jamaican people, particularly as we reposition the organisation to drive economic growth in a more deliberate way, and create employment opportunities," she said.

"This intense one-day retreat, which is being led by our new chairman, will not only emphasise JAMPRO's role in meeting national development goals, but also will analyse some of our current strengths and weaknesses in order to be more effective in delivering the corporation's mandate."

JAMPRO's new strategic objectives, according to Wehby, include, among other things, "a greater focus on job creation and on driving value-added investments that impact growth, exports and domestic linkages."

"The executive retreat will be a first step to positioning the organisation for this new thrust by the Government of Jamaica," he said.

JAMPRO is an agency of the Ministry of Economic Growth and Job Creation. To learn more about its core functions, visit www.tradeandinvestjamaica.org .