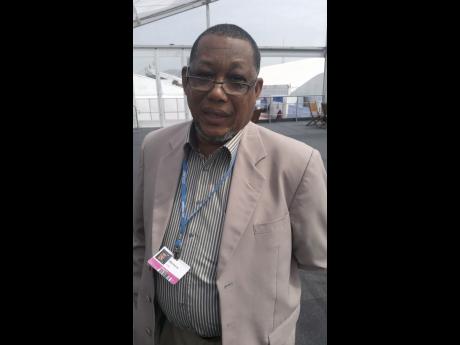 Contributed
MAHLUNG... emissions from the transport sector have increased significantly

JAMAICA SAW a reduction in its greenhouse gas (GHG) emissions between 2008 and 2012, signalling a step in the right direction for the island's efforts to stave off negative climate change impacts.

"We have seen a reduction from about 27,000 gigagrams (CO2 equivalent) in 2008 to just about 20,000 in 2012," revealed Clifford Mahlung, project administrator for the Third National Communication and Biennial Update Report to the United Nations Framework Convention on Climate Change (UNFCCC).

Mahlung was referencing findings from the Biennial Update Report that is to be submitted to Cabinet in another two or so weeks for their approval before submission to the UNFCCC.

"The main reason for this is the reduction in fuel consumption in the mining/bauxite sector. It was in 2008 that we had a downturn in the demand for bauxite," he noted.

However, a former seasoned climate change negotiator for Jamaica, Mahlung cautioned that the island would need to continue its efforts to reduce emissions - and for a variety of reasons.

"With the upturn in bauxite since 2012, you could see the levels going up," he noted.

And even with the move towards renewables 'that are now somewhere about 20 per cent of the energy mix', Mahlung said, emissions from the transport sector was trending up.

"What we have found is that emissions from the transport sector have increased significantly. It is now about 28 per cent of the total emissions and second only to the energy sector, which is 31 per cent," he noted.

"It means that there should see some focus on how we can reduce the emissions coming out of the transport sector," he added.

For this, Mahlung has lauded the efforts of actors such as the JPS.

"We support the report that we have heard from the JPS, for example, about the introduction of electric cars. And definitely we should also still be actively pursuing an improved mass transit system, such as rail,? he added.

JPS announced earlier this month that it was seeking a deal with American electric car maker Tesla - to fuel the appetite for electric cars, which are seen as one answer to current high levels of petrol consumption.

Global climate change is fuelled by emissions of GHGs, including carbon dioxide and methane, with significant negative implications for, in particular, small-island developing states, including Jamaica.

Among the negative impacts of the changing climate is increased global temperatures and extreme weather events, such as droughts, the burden of which Jamaicans have had to bear in recent times.