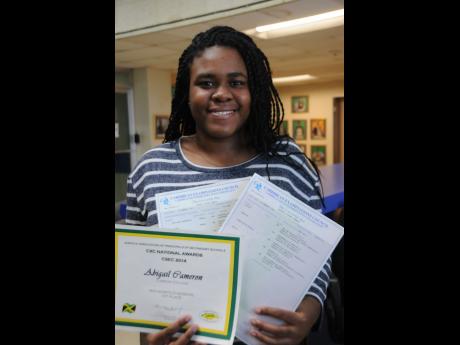 Jermaine Barnaby
The little star from Fletcher's Land, Abigail Cameron, displaying some of the many certificates and awards she has already captured as she gets ready to go off to the United States on a full scholarship.

Though born and raised in the gritty west Kingston community of Fletcher's Land, Abigail Tiffany Cameron has, from an early age, been smashing glass ceilings and rising above the standards set for the majority of inner-city children.

She is on a mission to positively impact Jamaica and, in particular, the education sector, but her journey will first take her beyond these shores to a private Ivy League research university, Dartmouth College, in the United States having been awarded a full scholarship valued at US$250,000 (J$31,700,000).

The scholarship offered through the King Scholar Leadership Program covers tuition, fees, room, board, books, miscellaneous expenses, and travel for all four years of study.

It was established in 2012 to help address the problem of global poverty by funding exceptional students from developing nations in the Caribbean, Latin America, Africa, and Asia.

In preparing for the college application process, Cameron attended Versan Educational Services where she did the American College Testing (ACTs), getting 35/36 for mathematics and 30/36 for English and Scholastic Aptitude Test, (SAT), getting 720/800 for biology. She also had to write seven essays for Dartmouth College choosing from topics on the institution's website.

Nineteen-year-old Cameron will spend parts of her junior and senior years in international development internships with organisations such as the World Bank, the International Monetary Fund, the World Justice Project, foreign ministers and global NGOs.

In addition, she will receive funding during one summer session to conduct research and write a report aimed at improving conditions in Jamaica.

"I am looking forward to what I can learn from my opportunities abroad and what I can bring back here because I definitely plan on coming back," said Cameron, who has chosen Dartmouth over Cornell College in the US and the University of the West Indies where she was accepted to do medicine.

Though having not yet decided on whether she wants to study actuarial science or medicine, Cameron is clear on which sector she wants to improve locally after completing her studies.

"I definitely want to come back and do something to help in education, because even though I come from a poor position, there were students living in much worse-off conditions than I was living in," said Cameron.

"And, at times, they would work so much harder than the rest of us and they are still disadvantaged in terms of scholarships. Students who didn't really need it as much, they are the ones who didn't have to work as hard and I think that is an area that needs to be fixed in Jamaica."

NOT LIMITED BY CIRCUMSTANCE

Cameron realised from a young age that the community in which she was born did not determine what she could achieve having won a spelling competition while in grade one at Jessie Ripoll Primary before going on to place second in the all-island leg; losing to a schoolmate.

"I was competing against students from the Sts Peter and Paul and other prep schools and I think from that age, I knew that my circumstances or situation didn't really limit me in terms of my abilities and I kept on that path," Cameron said.

She went on to win the all-island mathematics competition in grade six which prepared her nicely for life at Campion College, where she shared classes with some of Jamaica's brightest young minds.

"I felt that I had already achieved so much and I had basically put some of my doubts and my parents' doubts to rest as to what I was capable of doing going to Campion. So it was a new opportunity to challenge myself,' Cameron told The Sunday Gleaner.

And it is a challenge that she took by the scruff of the neck scoring distinctions in all nine Caribbean Secondary Education Certificate subjects back in 2014; placing first in the Caribbean in Mathematics.

"It feels good to see all my hard work payoff but it is not something that I never anticipated," said Cameron.

"Since Jessie Ripoll, outside from grade one, I knew that I had the ability to do a lot of things that would stand out being the person that I am and coming from where I am from."

Cameron, who is the only child for her mother Arlene Chambers and the second of two children for her father, Andrew, credits them for having played integral roles in her studies.

She is slated to start the orientation process on at Dartmouth on August 28 with school scheduled to begin around mid September.

According to Cameron there is some level of nervousness embarking on this new chapter in her life, but "it can only get better from here; I don't see it getting any worse."