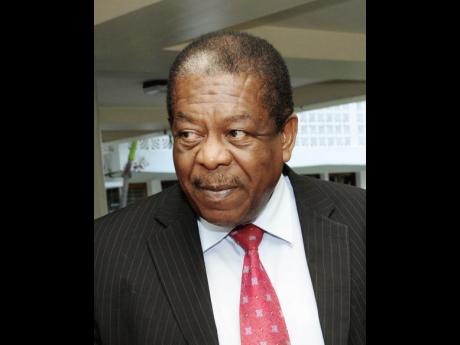 President of the Caribbean Court of Justice (CCJ), Sir Dennis Byron, has urged the peoples of the region now marking 182 years since the reading of the British proclamation, conditionally emancipating thousands from slavery in 1834, to acknowledge the advancements in the justice system.

"While we recognise that the justice system may not be where we would like it to be, it is in a very different place than where it was at emancipation," Byron said on Sunday, while giving the 23rd Churches' Emancipation Lecture under the theme 'Justice Reform and Emancipation' at the Webster Memorial United Church in St Andrew.

"As we think about emancipation, the main message I wanted to leave was to stop and give thanks for the evolution that has taken place."

Pointing to the 1865 Morant Bay Rebellion in Jamaica, Sir Dennis said that event, which "rocked society", highlighted a cry for justice by people who could not benefit from a system that functioned largely for the elites of the society.

"It involved loss of life and damage to property and created fear of wider rebellion against colonial rule in Jamaica. The colonial reaction was swift. There was no redress in the justice system in Jamaica at that time," he said.

The Caribbean jurist argued that two major recent events in Caribbean history demonstrate the advancement of a "home-grown" Caribbean justice system that, he asserted, ensure the protection of rights and freedoms.

First, he noted the "famous" Shanique Myrie case which, he said, pointed to a regional citizen who was able to access justice without any power base but with courage.

Myrie, a Jamaican, had brought a free-movement case against Barbados and won.

Sir Dennis said the second major event involved the West Kingston Commission of Enquiry and its recent report which, he argued before dozens of Jamaicans at the function, "demonstrated strides made in development of justice delivery in Jamaica".

"It (enquiry) emphasises the fact that concepts of human equality and equality before the law influence governments in this country (Jamaica). The entire process was home-grown with a Caribbean legal design (and) Caribbean jurists led by the distinguished Sir David Simmons, and declared standards that are the hallmarks of a modern society," he said.

The Caribbean judge acknowledged that regional citizens are complaining about the slow pace of the justice system brought on by the backlog of cases.

However, Byron noted that reforms are under way. That reform, he said, involves Caribbean Community countries becoming full members of the CCJ - acceding to the appellate and original jurisdictions.

According to him, most of the countries that had Britain's Privy Council as their final appellate court right after emancipation no longer do so, demonstrating, he said, an ability in former colonies to fully govern their own affairs.

Other reforms, he said, include the increased participation of civil society in offering suggestions; technology usage to improve access; and justice administration and the uniting of Caribbean countries.

In a report earlier this year, the United States characterised Jamaica's justice system as "overburdened, under-resourced and dysfunctional".

Claudette Gordon McFarlane was the chairperson of the lecture committee that involved congregations from the Bethel and Boulevard Baptist churches; Hope, Meadowbrook and Webster Memorial United Churches. The United Theological College of the West Indies also participated.