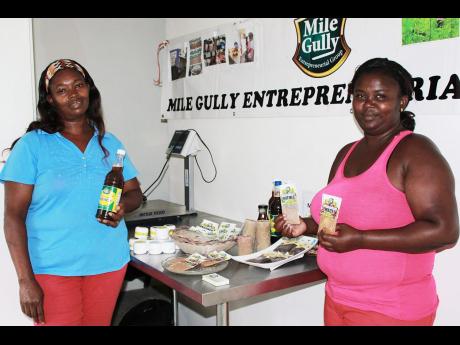 Orantes Moore
President of the Mile Gully Entrepreneurial Group, Hernetta Gordon (left), and the group’s secretary, Jacinth Easy, show off their independently made merchandise, which includes honey, candles, and pimento.

A group of commercially driven farmers from Mile Gully, St Mary, have revealed how the devastation caused by Hurricane Sandy in 2012 has helped them refocus, develop and enhance their local businesses.

Speaking recently, the president of the Mile Gully Entrepreneurial Group (MGEG), Hernetta Gordon, noted how the organisation was initially formed as an income-generating venture in 2010 to help counter the effects of unemployment in the area.

However, in the aftermath of Sandy, which devastated the Caribbean and was the second most damaging hurricane in United States history (costing around US$75 billion to clear up), the MGEG discovered that instead of raising poultry, greater opportunities were to be found making spices and honey.

Gordon told Rural Xpress: "We formed the group because there was a high level of unemployment in our community, so we decided to create our own employment. We did a feasibility study and, initially, it was decided that we would rear poultry.

"We got some help getting some coops from the Local Initiative Facility for the Environment (LIFE) through the Inter-American Foundation and Digicel, but because of Hurricane Sandy, in 2012 we lost all our hens and found it really difficult to get back on our feet.

"LIFE and the United States Agency for International Development (USAID) continued to fund and work with us on a greenhouse project, and they also provided some training on how to work with bees and make certain products from them. After that, we got a production centre."

The support and investment helped the group, which comprises two men and eight women, to diversify their portfolio and establish an operation making various bee-derived products, and pimento and nutmeg spices.

MGEG secretary Jacinth Easy explained: "When LIFE and USAID came and saw we are hard-working people and that the chicken coops could not generate enough money to pay all of us, they decided to ask what else we would like to do.

"So we held meetings, discussed some options, and eventually came up with the ideas for the greenhouse and spices. Right now, we grow tomatoes and sweet peppers in our greenhouse; and then we make nutmeg and pimento spices, and honey and other products derived from bees, including candles and hair oil."

Gordon believes the MGEG's new business model is a viable and profitable alternative for those in her community with little skills or training, but acknowledges that if the venture is to realise its true potential, more support is required.

She said: "Because of the large amounts of nutmeg and pimento that grow in the area, we plan to use our own products so that other people will benefit; not just the 10 members of the group, but the farmers we source the products from.

"Making the products is not a problem for us; our biggest issue right now is getting them out there. Most of the time, our market is the people who come and buy our products when we go out to local exhibitions and fairs. Our main purchaser is a health food store in Kingston, but we are only a small group, so we need help getting our products to the market."