Diary of a Ghetto Priest | Peaches, I am your brother 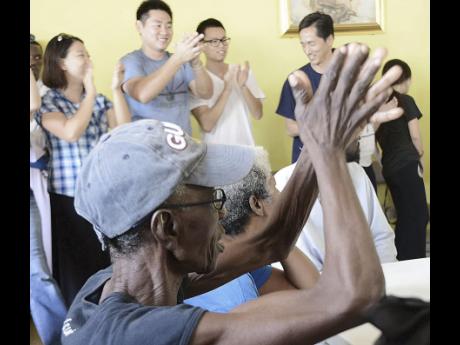 File
In this file photo woman applauds a group of visiting Koreans who sang at the Missionaries of the Poor's official opening of the Jesus the Redeemer Monastery and Outreach Ministry on Charles Street in Kingston.

Then Brother John Paul says, "I am your brother, come and live at my home." The brother gives a bed, clothes, a bath, medicine, food. Quietly and affectionately, the brother offers himself and his services, all free of cost, with love in his heart and the name of Jesus on his lips.

"I can't believe that I am living with such holy men."

Every day for the last 35 years we have been doing that. Jesus, the Good Samaritan did this, so we do the same.

More than 500 homeless we care for daily. They live with us until they die. Thousands have died and we build the coffin ourselves. We have holy burial services for the dead residents, we sing and pray joyfully as we take them to May Pen Cemetery.

So many have been sent off to Heaven. They had no family, but they are given a family by our brothers. There was no food, water, clothes or bed they are given that by the brothers.

Not all die there are miracles. The brothers joyfully experience many miracles.

Peaches was living with her mother in a dirty shack. Her mother, Rosaline, was suffering from HIV. Rosaline was sick unto dying. She was bony, she could not talk, she could not walk. Our brothers had to lift her unto a stretcher. After two days at Lords Place, she died of diabetes.

Peaches, who was also sick, wept when the brothers visited her shack, but at the Lord's Place, she did not weep inconsolably. Both Peaches and Rosaline were baptised the same day not on a Sunday, but on a weekday. It had to be done quickly before Rosaline died.

After her mother's death Peaches suddenly began to recover.

"You don't have to go home, you can stay here as long as you want," said Brother John Paul. She could not even sit on the bed at that time, but she began to sit up and hold on to the grill when the other homeless residents gathered around her to visit and chat with her.

It was amazing. Peaches, who was just a thin spectre of a human being, bedredden and not able to raise her head, started to shuffle, holding on to the hand of Brother John Paul as she went to and from the toilet.

Then she began to walk around and shout, "Glory!" alleluia! thank you, Jesus!" over and over. Her skin which was like crushed paper become smooth and pretty. She even became chubby. Then she asked us to take her to Seaview Gardens for she wanted to vacate the bed and give it to someone in need. She also wanted to show off to her neighbours.

"I love you, brothers. You give me life. I am 45 years old with one hundred more to go!" Now, if this is not a miracle, I don't know what is miracle. And the more Peaches works, pushing the wheelchairs and sweeping the floor, the stronger she becomes.

We received calls today from Montego Bay, Trelawney, May Pen, St Catherine. Social workers, the police, hospitals call us. Indeed, the harvest is great and the labourers are few. Pray that the Lord of the harvest will send forth many more labourers.