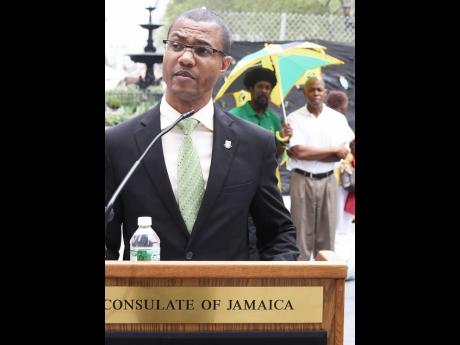 The Dumbarton Chapel at Howard University School of Law was packed to capacity as Jamaicans and friends of Jamaica turned out in large numbers for the service of thanksgiving in celebration of Jamaica's 54th year of Independence.

The annual church service, which is a calendar event of the Jamaican embassy, was attended by a capacity audience that included members of the Jamaican community in Washington; Baltimore; Delaware; Richmond, Virginia; and New York. Also in attendance were members of the diplomatic corps, a strong contingent of CARICOM ambassadors, and representatives from international organisations in Washington.

Prime Minister Andrew Holness, in his message, read by ChargÈ d'Affaires at the Embassy of Jamaica Marsha Coore Lobban, said that Jamaicans are a people of distinction with an illustrious history. "Imagine a country with a population of approximately 2.8 million people can have the fastest man and woman in the world and produce an artiste Bob Marley, whose single One Love, the BBC designated theme of the millennium and whose album Exodus, Time Magazine voted album of the century!" That, he said, was thrilling.

Holness said that Jamaica has produced the world-famous Blue Mountain coffee and has given the world the all-inclusive concept in tourism. The country has also produced world-class scientists, entrepreneurs, and statesmen.

He said that despite all of these achievements, the country was yet to maximise its full potential and that it must be the mission of this generation. Holness said that there was a sense among Jamaicans, especially the young, that the country has underperformed. He pointed out that failure in the post-independence era to grow our economy on any sustained basis was among the primary deficits.

"We must begin to reverse that and normalise economic growth and prosperity, which must be the commitment of this generation," he said.

In delivering the sermon, professor of theology of the Howard University School of Divinity, Rev Cannon Kortright Davis said, "Jamaica as a treasure must constantly transcend itself."

He said Jamaica must constitute the ideal form of social, cultural, religious, political, and personal existence, which day by day, strives to become a reality. He added that Jamaica must become the place where the face of God, the mind of Christ, and the spirit of justice, truth, and love will be found.

In a proclamation read by Ariel Bowen, on behalf of the Mayor of Washington, DC, Muriel Bowser, August 6 was declared Jamaica's Independence Day in Washington, DC. According to mayor Bowser, Washington, DC, was proud that numerous Jamaicans could call the city home.