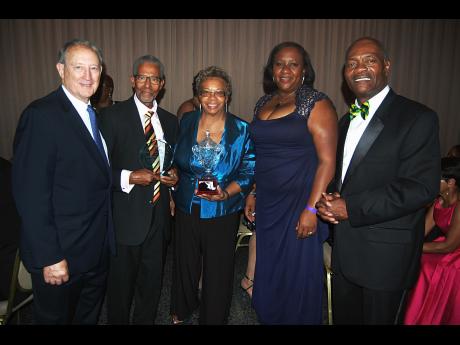 Two outstanding Jamaicans - Maryland State Senator Shirley Natham-Pulliam and prominent attorney Franklin Burke - were honoured with the Lifetime Achievement award and the Marcus Garvey UNIA award, respectively, by the Jamaica Association of Maryland (JAM) at its ball to mark Jamaica's 54th year of independence at the Martin West ballroom in Baltimore last Saturday.

Natham-Pulliam, a founding member of the JAM, received the Lifetime Achievement Award for her contribution to public service and politics. She has served the Baltimore community for 40 years in the field of politics and as a community activist. She was saluted for being the first Caribbean-born person and the first Afro-Caribbean nurse to be elected to the Maryland House of Assembly in Maryland's 380-year history.

Attorney Franklyn Burke, who received the Marcus Garvey UNIA Award, was cited for his tremendous contribution to the field of law and for assisting numerous Jamaicans with immigration and naturalisation issues.

In her remarks, Chargé d'Affaires for the Embassy of Jamaica in Washington Marsha Coore Lobban commended the honourees who, she said, were well deserving of the awards. She lauded them for their outstanding contribution to the Jamaican people in the respective communities in which they live. Lobban commended the JAM for its 28 years of exemplary service in Maryland.

"Over the years, JAM has lived up to its vision of supporting and sponsoring programmes that enrich the lives, educate youths and strengthen cultural and civic awareness.," she said.

She said that as Jamaica celebrates 54 years of Independence and seeks to further enhance its rich potential, she was proud that JAM has not wavered in its commitment to invest in the youth by providing scholarships.

"The organisation has been complementing the efforts of the Government to ensure that our future generation is equipped and empowered," she said.

In bringing greetings on behalf of the Governor of Maryland, Secretary of State John Wobensmith said that Maryland had the sixth highest Jamaican population in the US. This diverse culture and tradition of all immigrant groups play an important role in the community, and Maryland was proud of the contribution Jamaicans continued to make.

He commended the awardees and saluted Natham-Pulliam for her 40-year contribution to Maryland's political life.