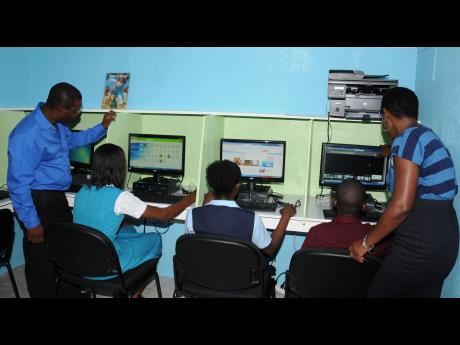 File
Children being supervised by two adults while they surf the Internet.

A number of Jamaica's children are putting themselves in serious danger by engaging in a risky practice they have dubbed 'catfishing'.

The term, which was derived from a 2010 documentary of the same name that has subsequently been made into a TV series, is used to describe meeting someone through social online then hooking up with them in person.

The film is about a young man who developed a romantic relationship with a young woman on the social networking website Facebook, with the woman turning out not to be exactly who she had said she was.

Last week, 14-year-old Teisha Reid* told The Sunday Gleaner that she had met several individuals in person after becoming acquainted with them online.

"A nuff people mi talk to who I don't know, like most of them right here," said Reid, gesticulating towards some of her friends close by. "Some will ask to meet up, and sometimes I go."

Reid, who was hanging out with scores of other young people at a popular shopping mall in St Andrew minutes after 10 p.m. last Tuesday, said she started visiting social-media sites from age 12 and is among thousands of Jamaica's children who have a social-media presence.

A Smartphone App Usage Survey conducted by the Office of the Children's Advocate between October 2015 and April 2016, on Adolescent Internet (Social Media) engagement among 514 students across the island, found that 58 per cent of them use social network sites.

But what activities are these children engaging in online? Well, according to a global survey conducted by the United Nations Children's Fund/Ipsos, approximately six out of 10 adolescents or 59 per cent deem meeting new people online as either somewhat or very important to them.

While youngsters flock to the various social-media platforms to meet people and engage in chatter, so too do sexual predators, according a 2015 Child Internet Safety survey by Pew Research Centre.

The survey found that 82 per cent of predators will use social networking websites to determine their victim's likes and dislikes to ensure the first encounter proceeds more smoothly.

Sixteen-year-old Robert Reid*, who said during the summer break he spends around 70 per cent of his day on the Internet talking to persons among other things, revealed that he and his friends were propositioned by a sexual predator online recently.

"Some of my friends and I got a friend request from somebody and we accepted it, and he started telling us that we looking nice and asking if we want to meet up and sending winks," said Reid.

"So we blocked him and he made other profiles and tried adding us again, but we didn't fall for it."

Another 16-year-old, Jason Brown*, suspect that he, too, fell prey to a 'catfish' five months ago after agreeing to meet someone he came into contact with online.

"The person used a girl picture, and when it came the day when I was to meet the person I kept calling to find out where the person was and I could not see them," said Brown.

"So I got vex and decided to go home. That's when the person text asking where I was, when I was at the spot they told me to stand up and wait on them. So the person whose picture I had seen online was not the person who turned up then."

Stacy-Ann Smith* said her mother, who is a member of the police force, has warned her to be careful about how she goes about her online activities.

But Smith revealed that she has failed to heed her mother's warning on more than one occasion, resulting in a terrifying experience.

"My mother is a police and she talk to me about it (online safety), because there are a lot of cases in the police diary about young girls getting abused and raped because of the social media where they meet man and get abused after," said Smith.

"But there was this youth, he was a catfish from overseas and he posted a picture of himself, and when we met him in real life he was much older and really black, and in the picture he was white and had pretty hair. And when we met up he robbed my friend's phone."

*Names changed to protect the children