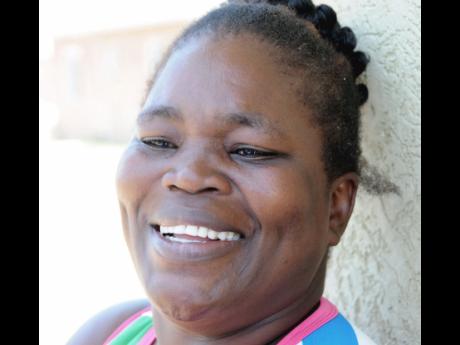 Jermaine Barnaby
Paulette Shortridge is all smiles as she speaks about her new house. 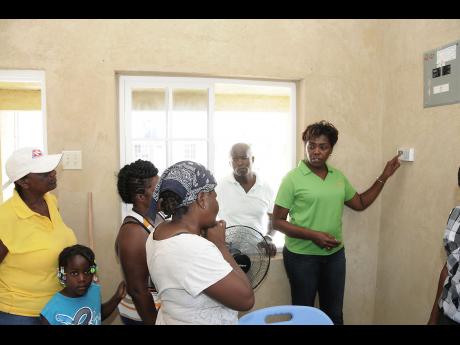 Jermaine Barnaby
Cecile McCormack of the Jamaica Public Service talking about the smart meters to some of the persons who have received houses built under the Barracks Relocation Project in Springfield, Clarendon. 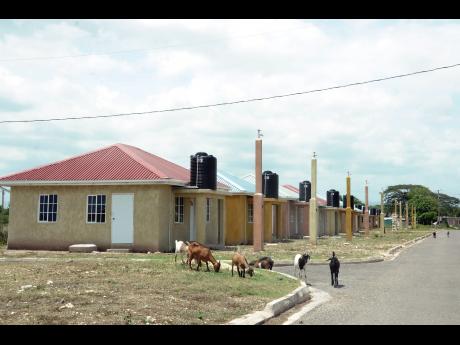 Jermaine Barnaby
A look at some of the houses built under the Barracks Relocation Project in Springfield, Clarendon. 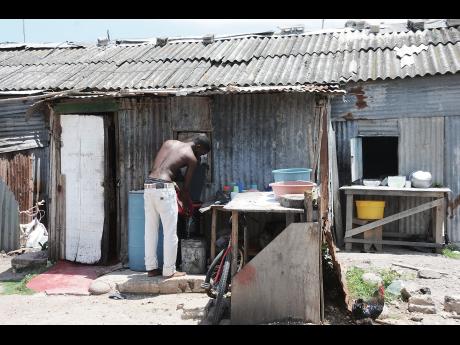 She had dedicated 20 years of her life to the Monymusk Sugar Factory and was crestfallen when her employment was terminated, but Paulette Shortridge was all smiles last week as she prepared to move into a new house near her former workplace, which has come at no cost to her and her family.

The 41-year-old mother is just one of 88 persons who worked for the sugar factory now collecting keys for the houses which were built under a Barracks Relocation Project funded by the European Union in Springfield, Clarendon.

The project is supported by the Government and implemented by the Ministry of Agriculture and Fisheries through the Sugar Transformation Unit.

For years, Shortridge had lived in a one-bedroom barrack provided by her former employees with her children and later on four grandchildren, and her husband. Her father had been a sugar worker for more than 30 years before he died, and with limited job prospects in their rural community, she too managed to eke out an income for her family by working in the fields.

"I cut burnt cane, cut the green ones, weed grass, plant the green canes, I throw manure," said Shortridge, who explained that she became a domestic helper during the off-season period.

"It's not easy, but you know it is our job, so we have to do it to survive. You have to just make up your mind, because sometimes when you come home, you cannot even move. You are tired, you are pained up. Sometimes you have to breeze off first," she said.

Now Shortridge will get to 'breeze off' in her new three-bedroom house with its modern fixtures. The brightly painted houses in the new housing scheme are in stark contrast to the dilapidated structures next door, where some of the sugar workers still live while they wait to collect their keys.

The proximity of both schemes made it easier for the sugar

workers to periodically take a glimpse at their future while dealing with the realities of their substandard living conditions.

"The house them got old, they were cracking, rain fall and we were getting wet," explained Shortridge in describing the conditions of the house which will soon become a part of her past.

Shortridge, like many of her neighbours, is preparing for the responsibilities that will come with home ownership. While she will not have to pay a mortgage, she will have to pay for her utilities, which was not the case while living at the sugar cane barracks.

Cognisant of the fact that the new homeowners will now have to pay their own bills, even though several of them have lost their jobs, representatives of the Jamaica Public Service (JPS) visited the new housing scheme last week to educate them about their prepaid plan which allows householders to pay for their electricity before use.

Special projects and logistics manager for prepaid electricity at JPS, Cecile McCormack, said each of the new householders who signed up for the prepaid plan was given $1,000 worth of kilowatt-hours free. Like other prepaid customers, they did not have to pay a $1,500 deposit upfront like postpaid customers.

"Some of them have concerns about paying for electricity because I believe most of them were laid off from full-time employment by the sugar factory, and this is one of the reasons why we have introduced prepaid electricity to them because some are now seasonal workers," said McCormack.

"They are doing like a few days at a time. That is what they have explained to us and so what we want them to be able to do is to have this product which essentially allows them to monitor carefully by the minute, and at the same time facilitate their irregular income, because they are not going to be earning every day, every month," added McCormack.

She noted that some of the residents are concerned about their power running out, but she said householders are given a mandatory warning when there is only five kilowatts remaining.

They can then call the JPS Call Centre to top up, as the JPS is just now getting ready to roll out its point-of-sale top up, which will allow customers to purchase electricity from a vendor in their community.

This will give unemployed householders like Shortridge the ability to earn a living by selling electricity to other residents.

The possibility of getting a job, in addition to her new house, has helped to ease the reality of Shortridge's current unemployed status.

"I feel good. I feel proud, but I have to give God all the glory first because He is the one who has provided for me," she said.

Ground was broken for the 88 houses by former Prime Minister Portia Simpson Miller in 2013. The units will accommodate an estimated 209 persons living in the barracks.