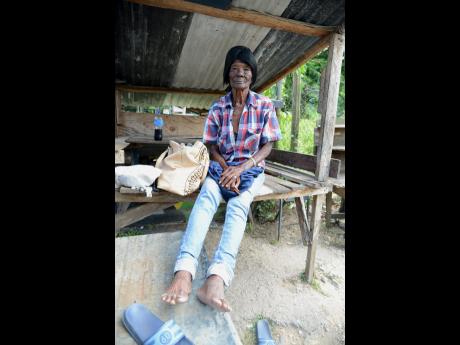 Ian Allen
Eunice 'Ms Coolie' Powell is a lonely soul inside the the Frankfield Market in Clarendon, while other vendors set up stall illegally on the streets of the town.

The weeks leading up to the reopening of school used to be a very profitable one for Eunice Powell, as her stall would be flocked by parents wanting her to outfit their children in khaki and tunic.

But the senior citizen is now hard-pressed to make even the $200 required weekly for her market fee, as the movement of the majority of vendors from the Frankfield Market in Clarendon to the town square has caused buyers to do their shopping in the no-vending zone instead of the market.

Powell, who is now in her 80s, is insistent that she will not follow the unruly crowd, although she is paying a high price for being disciplined.

"Darling, when you come here on Thursday, is me one, and when you come on Friday, is three of us. Everybody is out a street," said Powell as she explained that a fourth vendor comes into the market on Saturdays.

"I am selling back-to-school things right now, some 30 years now until my foot break. Is walker I have to use now, but I still come," said Powell.

"Sometimes we come in here, we no bruk wi ducks because nothing we don't sell," added Powell.

The situation in Frankfield is one that local government officials are struggling with in several other town centres, especially during certain times of the year such as the back-to-school and Christmas periods, when vendors abandon the designated vending areas and take to the streets.

This often results in poor sales for obedient vendors and creates a headache for the motoring public, who finds it difficult to drive through the towns.

Councillor for Frankfield, Orville Hackett, said several attempts and initiatives have been implemented over the years to get the vendors to remain in the market, but nothing has worked. As a result, the market is now being advertised for lease.

"As soon as those guys from the parish council come up here and clear them (street vendors), by the time they leave, they are back," said Hackett.

He said the vendors have contributed to pollution in the town and continue to do so, although they are fined once caught.

"I know the fish vendors are selling on the street side and dumping the fish gut and the scale in the drain. It is not nice," noted Hackett.

"We are still hoping to get them off and get them back into the market. That is the ultimate aim," he said.

Hackett hopes the market will be leased to someone planning to establish a supermarket as he believes this will attract more people.

He said this was the approach taken in Chapelton, where the market has been transformed into a supermarket, with stalls placed on the property for market vendors.

"That will boost the whole operations of the venue. We are thinking that the vendors, upon realising that people are gravitating towards the market, might want to come back because only a few of them are there now."