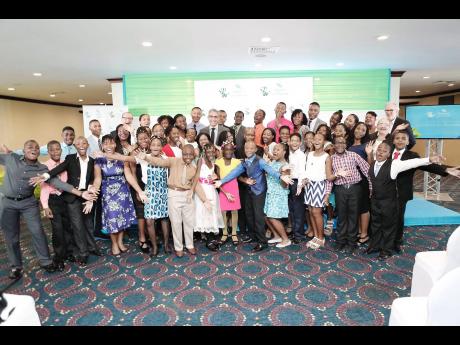 Contributed
The 44 recipients of GSAT and tertiary scholarships from the 2016 Sagicor Foundation Scholarship Programme, who were awarded last Thursday at The Jamaica Pegasus hotel, are all smiles. The recipients were joined by the Sagicor Foundation board of directors. Sagicor has awarded more than $18 million to students at the high-school and tertiary levelS for the 2016-17 academic year.

Kimberley Clarke is excited about starting her studies in accounting at the University of the West Indies (UWI), Mona, when school officially starts in another week. Moreso, her enthusiasm has intensified, after receiving a Sagicor Foundation Scholarship that will offset her expenses for the academic year.

"I am extremely grateful. The persons at Sagicor would not understand how much their help has impacted me. It is not a feeling I can describe. I thank the Sagicor Foundation for this opportunity," Clarke said.

Clarke was surprised that she was awarded the scholarship as she submitted her application just hours before the deadline.

The former St Jago High School student grew up in the Hampshire community just outside of Linstead in St Catherine. As a child, she was surrounded by her siblings and her extended family, including her grandfather.

"It was difficult because we didn't have much, but it wasn't very obvious at the time that we were poor. The environment, however, paved the way and encouraged me to succeed. I knew I could do better with my life and my mom also pushed me to work hard," Clarke explained.

However, eight years ago Clarke lost her mother, which was a very difficult time for her. "My father killed my mother and then he disappeared, and has been on the run since. It was one of the hardest things to understand and to learn how to deal with," she said.

After her mother's untimely passing, Clarke lived with her grade-four teacher for three years, followed by placement in foster care with the family that had also adopted her sister.

Her exam success fuelled her passion to become an accountant. "When I was in high school, I hated accounts. It was the hardest subject for me. My teacher and my parents pushed me to work at it and I got a grade one," Clarke said.

Her foster parents, Vivian and Annmarie Lawes, are proud of Kimberley's achievement. "She is a very rounded young lady, very industrious and caring. We are really appreciative of the assistance she has received from Sagicor," they said.