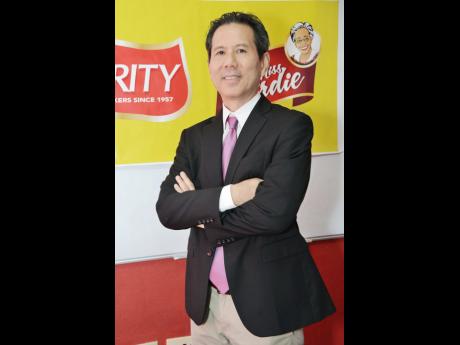 When told he was getting a 'CD', Anthony Chang jokes that he asked "of whom?".

Of course, what the caller meant was that Chang would be receiving the Order of Distinction in the rank of Commander (CD) for distinguished service to the public and private sectors.

"It's always nice to be recognised, but it's really not just about me," said Chang. "I'm humbled by it because many people do a lot of great things in Jamaica. I'm just the lucky one to be recognised."

Chang is currently the managing director of Consolidated Bakeries (Jamaica) Limited, a family business that Chang has put his own stamp on, including taking the company public.

"Family businesses have their strengths and weaknesses. The move to go public brings different governance to the company in how you run a company as distinct from a family company," he said.

Chang jokes that friends tease him that he's never really worked in his life, but that's not quite the case. His first job was bagging cookies at Butterkist during the summer holidays. He feels it's essential to start at the ground floor.

"I think it's very important that you always know what's going on at the organisation. All the work I've done, whether I was managing director or CEO of a company, I need to understand the company from top to bottom," he said. "It's either you understand it, or you have people around you who do."

Chang, a former president of the Jamaica Chamber of Commerce, has decades of experience in marketing and business administration. He has served on the board of numerous corporate entities, but the award also recognises Chang's public-sector work as well.

"To be fair, I think it (public-sector work) has given me a lot of pleasure, probably even more than business. Just to see Jamaica become different, for me, that's what it's all about. But it's not just about me. I was just the crazy one who came up with some ideas. I always say 'we' because it's a team effort."

He notes the creation of the business and consumer-confidence survey and the Jamaica Debates Commission (of which he is a commissioner), as two of the most fulfilling. The latter was quite eventful.

He also donates time annually to assist students at the Richard Ivey School of Business at the University of Western Ontario, Canada, where he studied.

He said he never hesitated about coming back to Jamaica after studying and working in Canada. It's this love of country that will see him shake the governor general's hand on Heroes' Day.