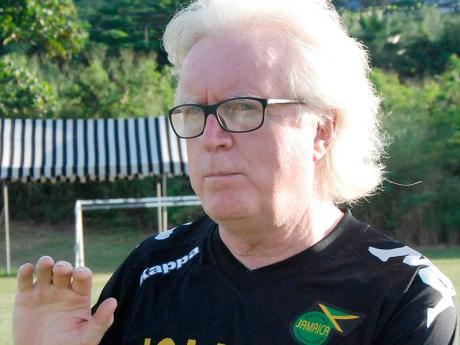 File
Winfried Schafer has been removed from duty for tonight's World Cup qualifying game against Haiti.

President of the Jamaica Football Federation (JFF), Captain Horace Burrell, has confirmed that Reggae Boyz head coach Winfried Schafer has been removed from duty for tonight's World Cup qualifying game against Haiti at the National Stadium.

Schafer was removed from the game pending further investigations into allegations that he unplugged the equipment cable of a media worker conducting an interview with the team's manager, Roy Simpson.

The incident happened at the Norman Manley International Airport on Saturday night, after the team's arrival from Panama, where they were beaten 2-0 in a CONCACAF World Cup semi-final match in Panama City on Friday night.

He later alighted from the bus and proceeded to interrupt the interview with Simpson by unplugging the cable after Simpson consented to an interview with the television station.

When contacted this morning, Burrell said "he (Schafer) has been removed pending further investigation."

Jamaica will be playing for pride this evening in their final group game against Haiti, as both teams are out of contention.