‘I want my son!’ - Mother fears her missing child might be dead 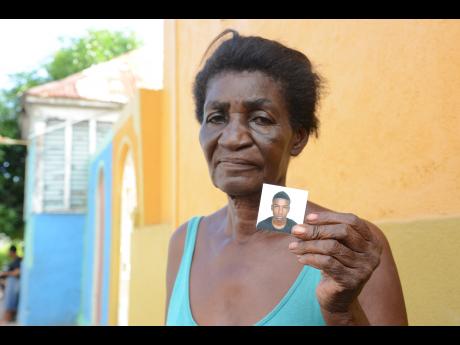 Maugelet Johnson has not seen or heard from her son in more than five months, and as the time drags on, the elderly woman from Wildman Street in Kingston grows increasingly worried that she will never see him alive again.

"Him missing from the April 8. I don't know what happen to my child. I don't know if him dead. The eight of last month is five full months and until now none of we don't see or hear anything from him," said the mother, her face creased with concern.

Her son, 27-year-old Nagash McIntosh, went missing from East Queen Street in downtown Kingston, after receiving a phone call as he

waited in a bar opposite the Kingston Central Police Station.

That's not far from Orange Street where he hustles, selling patties, loading buses or anything else that brings a dollar.

According to Johnson, while she does not know Nagash as a criminal, the grim reality of the violence which rocks communities in and around the Wildman Street area, along with the oddity of him abandoning home for such a long period, is eating at his relatives' faith that he is still breathing.

"I am the last person to see my son go through the gate and until now I don't behold my son," cried the mother, holding her head as she broke into tears, which she said was a regular feature of her sleepless nights.

"The night I don't see him come in, his sisters went to Central (police station) and they made the report. Until now I don't hear anything from the police," lamented Johnson.

Last week, head of the Kingston Central Police Division, Superintendent Wilfred Campbell, was not able to provide an update on the investigation into McIntosh's disappearance, but promised an update this week.

But another senior cop told The Sunday Gleaner that despite Jamaica's crime-filled reality, it is still too early to assume that McIntosh is dead.

"The police wouldn't make that assumption. The person could have just left the community for whatever reason, he could have migrated, he could be in jail somewhere. The last thing we want to think about is death," said the senior policeman who asked not to be named.

"Five months is much too soon. We have seen persons missing for a year, for six months, two years, and then return home in perfectly good condition," he explained.

McIntosh' face has been plastered on several social-media sites, including that of Crime Stop Jamaica.

He is of brown complexion, medium build and is about five feet nine inches tall.

Reports are that he was last seen wearing a grey and white stripe merino, short denim pants and a pair of blue and white sneakers.

Anyone knowing the whereabouts of McIntosh is being asked to contact the Central Police at 922-0308 or 119.