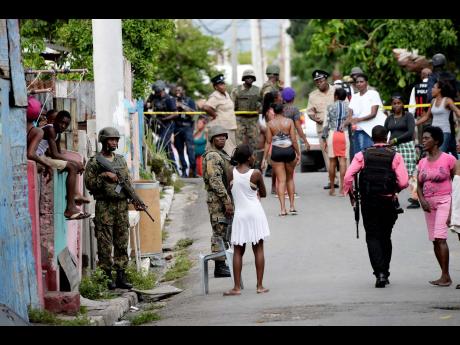 Jermaine Barnaby
Members of the security forces keep watch as residents converge at the spot where Steve ‘Frenchie’ Allen was fatally shot by members of a police team last Monday.

Steve Allen, otherwise called 'Frenchie', the man fatally shot in an alleged shoot-out with the police in west Kingston, has been described as a rogue killer who was hated by many in his community.

Days after his death, some residents of Denham Town told The Sunday Gleaner that Allen was initially from their community but formed a strong alliance with men from the rival Young Generation gang which operates out of Tivoli Gardens, following his sister's murder about a year ago.

Allen's sister was reportedly killed by thugs from Denham Town, and despite being shot, allegedly by his cronies from Tivoli Gardens, following a fallout earlier this year, he was bent on revenging his sister's death.

Police investigating that shooting told our news team that it is suspected that he was shot by men in Tivoli Gardens as he was getting "too hot" and was causing police to flood the area.

"Some people hate him because him take set on the youth dem in Denham Town, and then you have some people who feel that him dead a hero because of what them do him sister," said one resident who declined to be named.

"Why most people in Denham Town never liked him is because even if you a bad man, once you start kill woman and pickney dem a go push you out," she continued.

Allen was cornered and shot on Monday by police who had been on his tail since information surfaced that he was among the hoodlums involved in the shooting of a five-year-old girl and three men in Denham Town on September 6.

Police said a team on patrol in the area last Monday saw and accosted Allen, who opened fire at them and ran.

According to the police, he was chased on to premises in the area when he realised that he was cornered. The cops said he turned and fired at them and they returned the fire, hitting him.

Allen said he counselled the young man mere weeks ago.

"He was a prime enforcer for the Tivoli gang, and why the Tivoli gang liked him so much is that he was a man full of energy. He was always ready to just press trigger. He didn't even think about it," said Chambers.

He told our news team that Allen was charged with murder about two years ago but had to be freed as no witnesses came forward against him.

Some residents have challenged the police's version of the shooting, claiming that Allen was killed in cold blood.

They have also rejected the claim that he was determined to avenge the killing of his sister, and charged that he was wrongfully accused of almost any shooting that took place in the area.