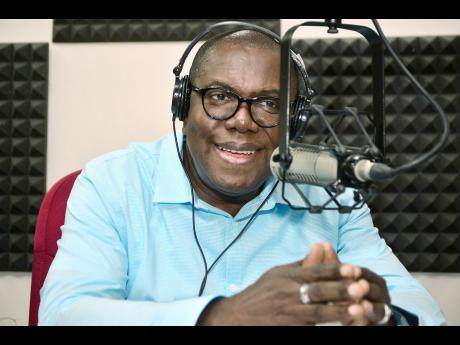 Patrick Planter
Cliff Hughes is now very comfortable on the job, a far cry from the first time he picked up a microphone.

After a brief teaching career, Emmy Award-winning journalist/businessman Clifton Gladstone Patrick 'Cliff' Hughes has for 30 years been educating a wider classroom from various media houses and now his own, Nationwide News Network (NNN).

And on National Heroes Day, October 17, he will be rewarded with the Order of Distinction, Commander Class for his service to media and communications in Jamaica.

Not surprisingly, Hughes is more proud of this award than he is of the coveted Emmy because of its scope, as it represents national recognition of his three decades of work. In an interview with The Gleaner, Hughes admitted to being shocked when he got the call from the chancery of the Prime Minister's office.

"'You sure you have the right person?' was my immediate response," Hughes said. Upon confirmation, he requested time to think about whether to accept it.

His reason: "I realise that I occupy a position that leaves the burden of many expectations on my shoulders, so I wondered how it would go down with the public. I spoke with my family members, who all agreed that I deserve it. Then the congratulatory calls began to pour in from scores of Jamaicans from all walks of life - including former Prime Minister P.J. Patterson, who said the honour was well deserved - so I accepted," Hughes said.

Upon reflection, the journalist par excellence revealed that his journey to the present was not easy. Coming from very poor circumstances and having lost the opportunity to study for the career of his first choice, law, he made the cut of 30 students from the 200 who sat the exam for CARIMAC, where he met Alma Mock Yen, someone he still holds in high esteem.

Listeners to Hughes' smooth professional on-air delivery today would be surprised to learn that the first time he took up a microphone, he trembled violently and harboured a lot of self-doubt.

"But I decided I had to master it, and Mrs Mock Yen taught me a lot about broadcast journalism and instilled in me a sense of the breadth of what communications is and to always strive for discipline and excellence," Hughes noted.

He also credits the late Carl Stone for being another major influence in his life. Stone was his political science lecturer at university.

Hughes had to work while pursuing his degree and upon completion, was offered a trainee announcer position at RJR on the graveyard shift in 1986. He later moved into an opening in the sports department.

When he won a Chevening Scholarship, Hughes completed his master's degree in communication policy in London, England - something that helped to prepare him for his present managerial role.

But great things were ahead in his career when, in 2002, he listened to the US media's characterisation of Lee Boyd Malvo as the typical Jamaican bad boy who linked up with John Lee Muhammad in the Beltway sniper attacks in the United States over a three-week period.

At the time, Hughes was the host of the popular TV programme 'Impact' and he asked the producer to go digging to find out who Malvo really was. Their search revealed that Malvo was a gifted young boy who was the victim of poor parenting.

"We were shocked, this was the opposite of what we'd heard on TV. Relatives and friends said that's not Malvo. We found a schoolmate of his who, during our interview, unwittingly gave us the title of the show, 'The Potter and the Clay'. The show was widely acclaimed in Jamaica and later picked up by FOX News in the US.

Hughes said the US network contacted him and they collaborated and tweaked the local report, subsequently airing it on their network. That led to the Emmy, which some doubting Thomases even went to great lengths to prove wasn't real. In their mind, none of the coveted statuettes had ever been awarded outside of America's borders. But it certainly was so.

In spite of not having set out to enter media management, the opportunity arose and Hughes embraced it. There are challenges along the way but, looking ahead, Hughes sees NNN as a multi-media company comprising radio, online and video content.

"I would also love to formalise an on-the-job training programme in the mechanics of broadcast journalism. This would hopefully help to fill the gap between the theoretical and practical, while not competing with what CARIMAC offers," Hughes said.

With the recent merger of the island's two largest media organisations, and the increased competition for advertising revenue, would Hughes be averse to a merger in the future? He told The Gleaner that he believes mergers are inevitable as small media entities cannot survive on their own.

But for now, he is looking forward to Monday, October 17, when he accepts his nation's honour in the presence of his mother, siblings and other family members who will be flying in to share his big moment.

Cliff Notes: a celebration of achievement
Salute to service - Gary, Glenroy among more than 140 conferred with national honours and awards