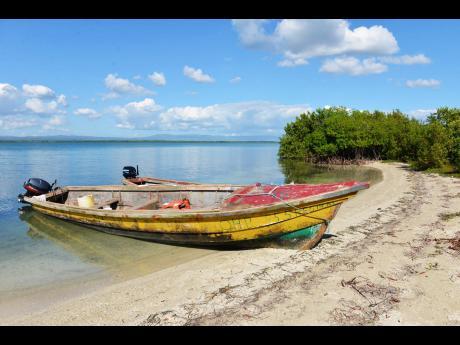 In this January 25, 2014 photo, a fishing boat rests on a sandy beach of uninhabited Little Goat Island.

The Jamaica Environment Trust (JET) says it welcomes the announcement that the government will not be developing a transshipment port and industrial park on the Goat Islands in the Portland Bight protected area.

Prime Minister Andrew Holness last night said the decision is due to the environmental damage it would cause to the area.

Holness’ announcement came only days after the International Monetary Fund (IMF) published a report which said the Jamaican government plans to press ahead with the project.

However, speaking in New York last night, Prime Minister Andrew Holness said other locations are being considered for a transshipment project.

JET says it is looking forward to receiving further information about the alternative locations.

JET is also calling on the Prime Minister to hold a press briefing on his return to Jamaica to discuss other major environmental decisions that are pending.

Last night Holness stated that the information about the Goat Islands project in the IMF document does not accurately represent the decision of his government.

However, he did not explain how the entry ended up in the document, which the Government submitted to the IMF.

He says he will be making a statement in Parliament to clarify the matter.