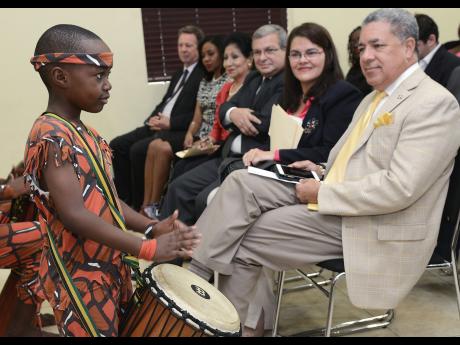 Rudolph Brown
Luisa Gutierrez (second right), Charge D’ Affairs of the Embassy of the Bolívarian Republic of Venezuela; Jose Tomas Ares (right), dean of the diplomatic corps in Jamaica and Bernardo Guanche (third right), ambassador of Cuba to Jamaica, admires the young drummer from the Institute of Jamaica Junior group perform at the Institute of Jamaica and the Simon Bolívar Cultural Centre’s 201st anniversary of Bolívar’s Letter from Jamaica at the Simon Bolívar Cultural Centre, 10 -12 North Parade, Kingston on Tuesday, September 20.

Dr Hughes was bringing greetings on Tuesday at the 201st anniversary of Bolivar's famous 'Letter from Jamaica', where he outlined his vision for a liberated and unified Latin America. The event also marked the anniversary of the centre that was opened a year ago.

"We intend to continue to give support from the fund to the centre. Just two years ago - and we're continuing the discussion - our board voted to establishing a fund ... to ensure the maintenance and sustainability of this centre," he said. "It is too important of a monument to allow it not to support itself, but more importantly, to keep it going."

The centre is located at North Parade, bordering on Church Street in the busy area of the capital. Dr Hughes said he would be meeting with officials of the Kingston and St Andrew Corporation and other stakeholders to ensure the building and its surrounding environment are properly maintained.

"We want to have this as a symbol of beauty, a symbol of learning and a symbol of the continued friendship between ourselves and Venezuela. This building represents the deep, long and binding friendship and celebration of our togetherness over 201 years," he said. Bolivar wrote the Carta de Jamaica while he was exiled here in 1815.

"Jamaica is a place that touches many shores, even from where we sit, and the fact that he was exiled here and we have an opportunity to share in this history, we are truly proud of this," said Nadine Boothe-Gooden, manager of the cultural centre. Jacqueline Bushay, director of the junior centres and the Bolivar Centre, read a message from Culture Minister Olivia Grange.

"We are proud that Jamaica provided a place of safety and inspiration for the great liberator to continue his quest for political and economic independence," she read. "We are proud that our country's name is forever linked to a document and a movement that liberated millions of people." Noting the occasion also marked the first anniversary of the opening of the Bolivar centre, the speech from Grange said: "After 201 years, the Carta de Jamaica and the Bolivarian principles remain relevant.

"Let the sentiment of freedom expressed in this unique work inspire us all to make a difference in our world," she added.

Bernardo Guanche, co-ordinator of the Group of Latin American and Caribbean (GRULAC) and Cuban ambassador to Jamaica, noted the formation of groups like GRULAC are fulfilling Bolivar's vision of creating a unified Latin America based on the tenets of sovereignty and anti-colonialism.

"Let use this celebration to call on our beloved continent not to give up the dream and ideas of integration of our founding fathers," he said.