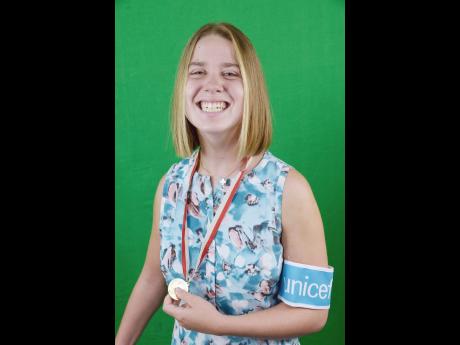 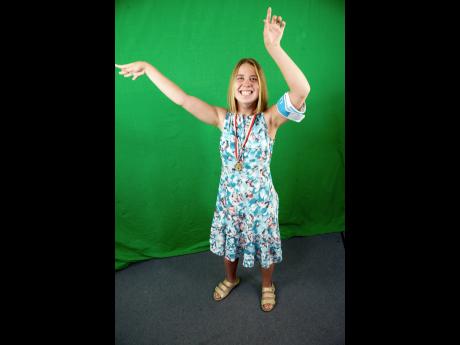 Jermaine Barnaby
Meyer during a vist to The Gleaner's North Street office.
1
2

Special Olympian Lucy Meyer knows at first hand that sports can break down barriers, and this is the message she has been sharing as she meets with world leaders such as United States President Barack Obama, government senators, school officials and, most recently, children in Jamaica.

The 17-year-old was diagnosed with cerebral palsy at birth and doctors told her parents she would never be able to sit up. But the bubbly 10th-grader has defied the odds and has become a force to be reckoned with among her peers, as she competes against them in swimming, basketball and soccer.

Her exploits as a Special Olympics swimmer and her concern for those living with disability have made her a natural advocate for special-needs children.

Since 2015, she has been serving as the spokesperson for the partnership between the Special Olympics and the United States Fund for UNICEF. Lucy now hopes to help raise US$1 million over the next two years for projects in Jamaica, Mexico, Peru, Paraguay, and Brazil.

"Before Special Olympics, it was not fun, because I couldn't play sports and all my friends had club soccer, club volleyball, club basketball, but I couldn't play because it was all kids without disabilities, there was no area for kids with disabilities," explained Lucy, who started swimming at eight years old.

Today, it is her hope that children with disabilities are involved and not just sitting on the sidelines waiting to explore their potential. The California native believes one of the surest ways for this to happen is for everyone to embrace inclusion in sports by encouraging those with disabilities and those without to play together.

She has spent the last five days in Jamaica meeting government officials, school administrators and children, in an effort to get them to embrace this concept.

The teenager loves the fact that she is now competing with children without disabilities, and although she is still in high school, she is a part of the University of California, Los Angeles programme, which allows her to compete and play with college students. Like other athletes, she weight-trains and is very conscious about her diet.

During her visit to the island, she was given an opportunity to address other student athletes at the Llandilo School of Special Education in Savanna-la-Mar, where Special Olympics Jamaica staged the Healthy Athletes Screening activities, with support from UNICEF. More than 100 athletes were screened.

"I love it, it is beautiful!" she told The Sunday Gleaner of her Jamaican experience.

"I am having so much fun with all the kids and speaking and seeing all the programmes; it is wonderful."

Meeting with children at the schools in Jamaica has been one of the highlights of her visit, but having members of the Jamaican Special Olympics team meet her at the airport will be hard to forget.

Special Olympics Jamaica reaches more than 4,000 children and their families through their programmes and activities. In 2015, the Jamaican team took home 29 medals at the World Summer Special Olympics Games.

"I wish I could do it again, it was wonderful. When I came at the airport, the kids were waiting for me on the outside and greeted me with welcome cards and saying everything. It was wonderful," she beamed.

Lucy's mother, Jamie Meyer, feels her daughter's message of inclusion and acceptance is an important one, given the stigma experienced sometimes by children living with disabilities.

"One of the things we are trying to do is just to change the culture," said Meyer, who is a board member of the Southern California Regional Board of the US Fund for UNICEF.

"That's what Lucy's whole message is, to break the isolation, break the segregation that is occurring, and we want everybody to get together."

Based on what she has gleaned during her stay in Jamaica, Lucy hopes more investments can be made in transportation for children with disabilities, but more important, she wants more sponsorship and exposure for activities involving special-needs children.