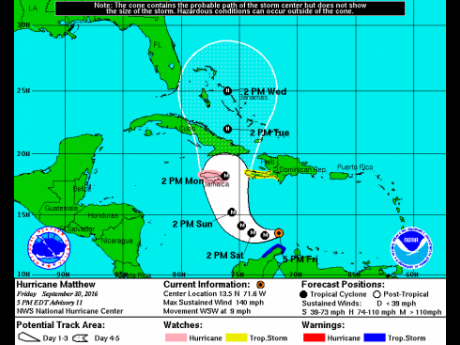 Jamaica is now under a hurricane watch as Matthew strengthens into a powerful category four hurricane with Jamaica directly in its paths.

Head of the National Meteorological Service, Evan Thompson said the decision was taken to forego issuing a tropical storm watch and go directly to the hurricane watch.

The formal announcement is expected at five o'clock.

He told journalists this afternoon that a hurricane warning is likely for Sunday.

Matthew is expected to pass near Jamaica on Monday but the effects will be felt from Sunday.

He said relief agencies have been ordered to find all 2,000 street people across the country and place them in shelters.

McKenzie said all shelters will open tomorrow as the Office of Disaster Preparedness and Emergency Management is already distributing essential supplies.

The Jamaica Urban Transit Company, he said, is on standby to support evacuation.

The Local Government minister also warned the threat posed by Matthew "is not a joke" as he disclosed that "a wide cross section of Jamaica do not believe Matthew is coming".

"This is a national crisis. Jamaica is going to go through a rough next 72 hours," he said.