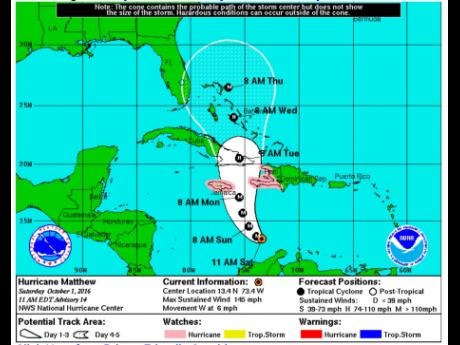 KINGSTON, Jamaica (AP):
One of the most powerful Atlantic hurricanes in recent history weakened a little on Saturday as it drenched coastal Colombia and roared across the Caribbean on a course that still puts Jamaica, Haiti and Cuba in the path of potentially devastating winds and rain.

Matthew briefly reached the top hurricane classification, Category 5, and was the strongest Atlantic hurricane since Felix in 2007.

The US National Hurricane Center in Miami said Matthew's winds had slipped from a peak of 160 mph (260 kph) to a still-devastating 145 mph (230 kph) and it was expected to reach the eastern part of Jamaica on Monday.

IN PHOTO: This NOAA satellite image taken today at 12:45 AM EDT shows well defined Hurricane Matthew continuing to slowly move westward at about 7 MPH across the Caribbean. - AP

The forecast track would carry it across Cuba and into the Bahamas, with an outside chance of a brush with Florida, though that would be several days away. "It's too early to rule out what impacts, if any, would occur in the United States and Florida," said Dennis Feltgen, a spokesman at the Hurricane Center.

As Matthew skimmed past the northern tip of South America there were reports of heavy flooding and at least one death - the second attributed to the storm.

Authorities said at least 18 houses were damaged along the La Guajira peninsula of Colombia, which has been suffering from a multi-year drought. They said a 67-year-old man was swept away to his death by a flash flood in an area where it hadn't rained for four years.

Colombian authorities closed access to beaches and urged residents living near the ocean to move inland in preparation for storm surges that they said would  be most intense on Saturday.

There was also concern that heavy rain across much of the country could dampen turnout for Sunday's nationwide referendum on a historic peace accord between the government and leftist rebels.

In Jamaica, high surf began pounding the coast and flooding temporarily closed the road linking the capital to its airport. Carl Ferguson, head of the marine police, said people were starting to heed calls to relocate from small islands and areas near rural waterways.

Many also began stocking up for the emergency. 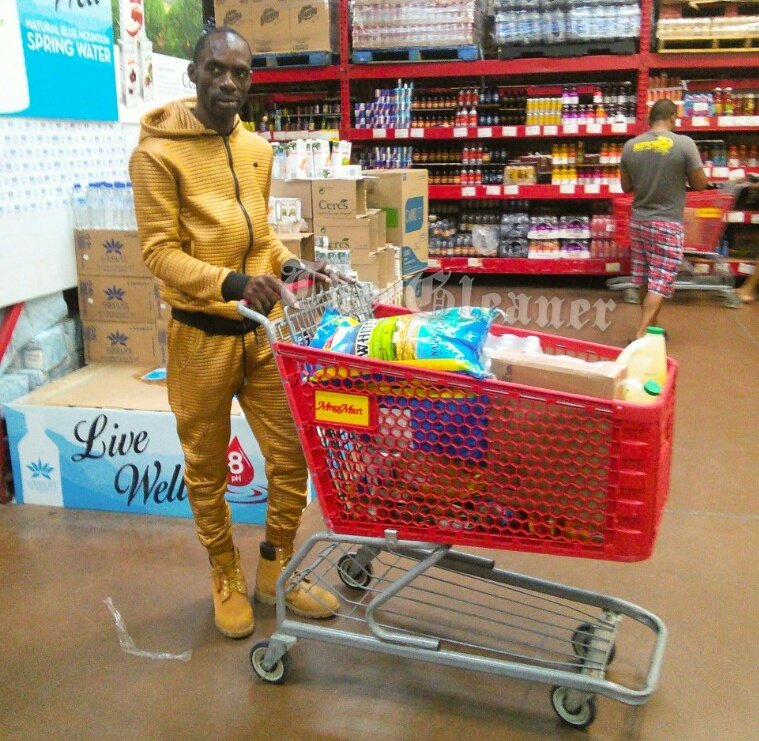 IN PHOTO: Dancehall entertainer Ninjaman gets some shopping done at MegaMart as Hurricane Matthew continues on a path towards Jamaica. - Carolyn Sinclair photo

"I left work to pick up a few items, candles, tin stuff, bread," 41-year-old Angella Wage said at a crowded store in the Half Way Tree area of the capital, Kingston. "We can never be too careful."

Feltgen said storm force winds and rain will arrive well before the center of the storm. Jamaicans "basically have daylight today, they have tonight and they have daylight tomorrow to take care of what needs to be done," he said.

Jamaicans are accustomed to intense tropical weather but Hurricane Matthew looked particularly threatening. At its peak, it was more powerful than Hurricane Gilbert, which made landfall on the island in September 1988 and was the most destructive storm in the country's modern history.

"Hurricane Matthew could rival or possibly exceed Gilbert if the core of the strongest winds does actually move over Jamaica," said Dennis Feltgen, a meteorologist and spokesman for the hurricane center in Miami. "There is no certainty of that at this point." Forecasters said rainfall totals could reach 10 to 15 inches (25 to 38 centimeters) with isolated maximum amounts of 25 inches (63 centimeters) in Jamaica and southwestern Haiti.

Kingston, in the southeastern corner of Jamaica, is expected to experience flooding. The government issued a hurricane watch on Friday, and a tropical storm watch was issued for Haiti's southwest coast form the southern border it shares with the Dominican Republic to the capital of Port-au-Prince.

In Haiti, civil protection officials broadcast warnings of a coming storm surge and big waves, saying the country would be "highly threatened" from the approaching system over the next 72 hours. They urged families to prepare emergency food and water kits. 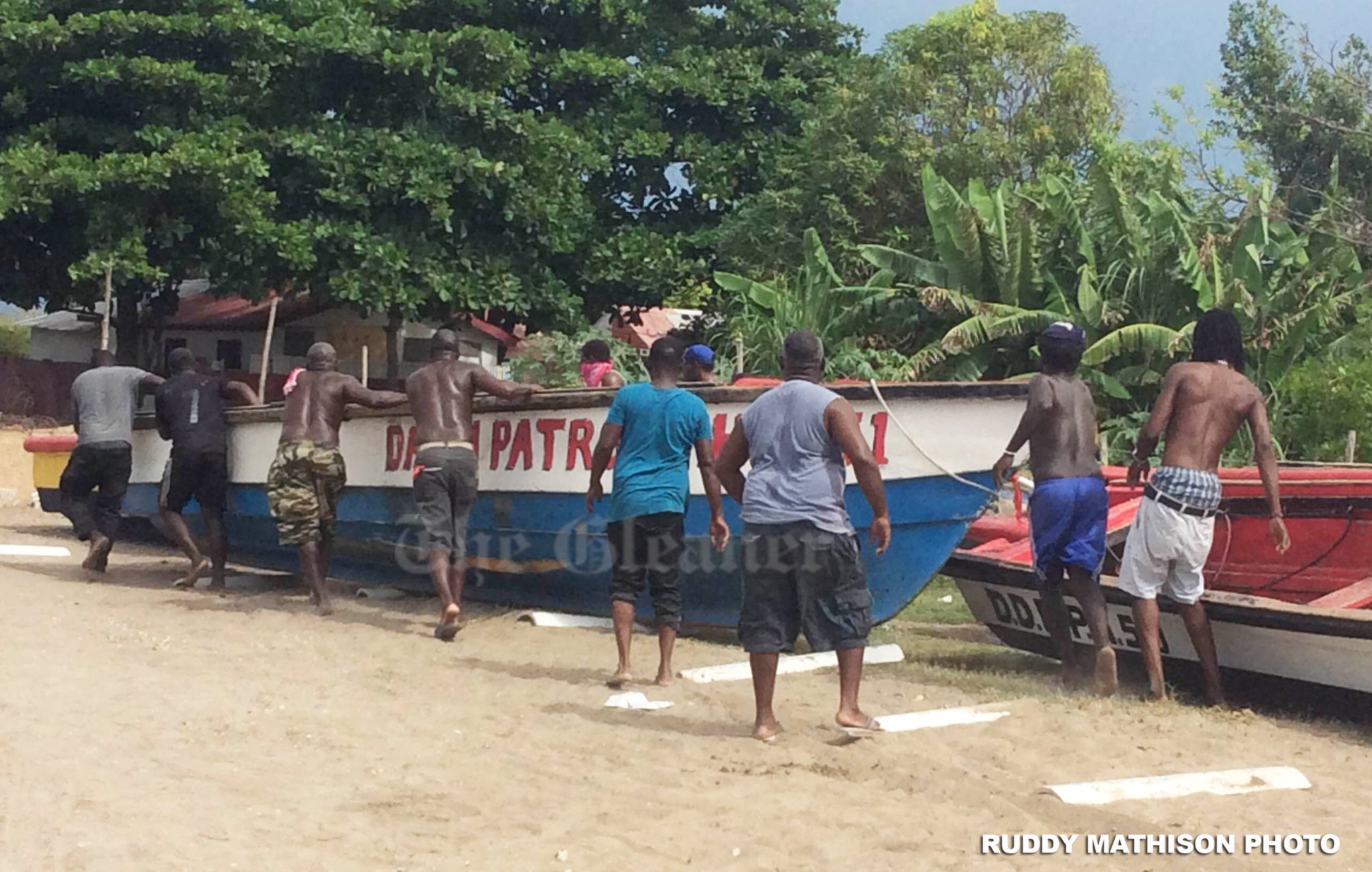 IN PHOTO: Fishermen secure their boats at the Port Henderson fishing village in St Catherine as Hurricane Matthew heads towards Jamaica.

Matthew caused at least one death when it entered the Caribbean on Wednesday. Officials in St. Vincent reported a 16-year-old boy was crushed by a boulder as he tried to clear a blocked drain.