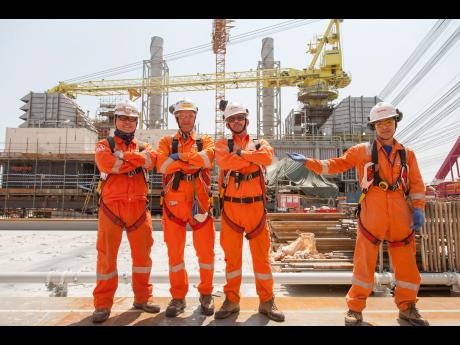 Contributed
Keith Patterson (second left) with WorleyParsons team members. They were taking part in the Hebron Topside platform project, which contained the process and utility units, completed and recently sailed to Canada, leaving Ulsan, Korea on June 30, with arrival in Newfoundland, Canada on September 5. The total design and build cost for Hebron is approximately US$8.3 billion.

Jamaica-born engineer Keith Patterson, who specialises in the design and construction of oil and gas pipelines, still recalls with reverence his contribution to erecting the platform used to extract oil from Arkutun-Dagi, an offshore oilfield located on Sakhalin - Russia's largest island.

"The Arkutun-Dagi project was the most challenging from a design and construction point of view, with the Russian code and regulation requirements. The fact that it was the largest topside platform built and transported was a huge achievement and to be part of that, I can be proud," he said in response to questions from The Gleaner.

As the lead piping engineer with ExxonMobil, Patterson has worked on projects in Qatar, Japan, Paris, Nigeria, Angola, Indonesian, Canada, Russia and the United Kingdom; ending his near 10-year stint with the global oil giant in June on construction projects in Korea.

A native of Westmoreland, Patterson, who has lived in London since the 1960s, explained that he entered the oil and gas industry because of his dissatisfaction with his previous job.

"My first job was in a signs and graphic display company in Camden, London, as a trainee draughtsman. I could not see a future or adequate progression in this field, so I changed to the oil and gas industry, where training was being offered by Fluor (GB) in Moorgate, London, which is an engineering and construction company," he said.

Patterson eventually went on to earn a bachelor of science in engineering, which paved the way for him to be a stress engineer at engineering firm Stone & Webster and later on at Bechtel, where he was promoted to lead piping engineer.

"I remained with Bechtel for 16 years, completing numerous global projects in the position of lead piping engineer, with international assignments to Saudi Arabia, Abu Dhabi, Kuwait, Paris, Tunisia, Italy and Russia, then looking for a change, I posted my CV with employment agencies to see what was available. One agent contacted me with a lead piping engineer position working with the ExxonMobil project management team in Houston, Texas, which suited my career development," he said in sharing how he landed the job with ExxonMobil.

His first project with the oil giant was based in Qatar, after which he was transferred to ExxonMobil Development Company Office in Texas and was charged with the responsibility of technically supporting all active ExxonMobil projects, from a piping design perspective projects that ranged up to US$10 billion in terms of capital cost.

"I have been with ExxonMobil from 2007 through to June 2016, during which time all of my industry knowledge and experience was utilised in one way or another. My knowledge of specific oil and gas industry codes and standards (European, Russian and American), stress analysis, constructability awareness, safe working practices, gave me the sound foundation to successfully satisfy ExxonMobil's needs," he said.

Now in his fifth month of retirement, Patterson has left ExxonMobil with a deep sense of satisfaction and a treasure trove of life lessons from his journeys around the world.

"I have seen and lived with a variety of cultures, and each one has its attractions along with obstacles, but having the experience gives me a broad cultural understanding and acceptance, which will stay with me throughout my retirement," he said.